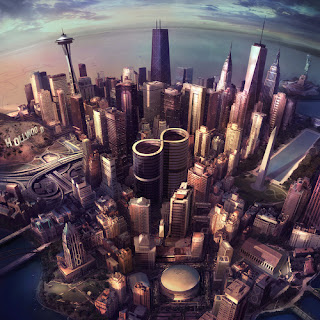 Foo Fighters will be belting out songs from their latest CD Sonic Highway at Wrigley Field.

Last Friday’s Slumgullion was merely a ramekin of leftovers, so I’m making sure this week’s serving is at least a bit more substantial by offering it on Thursday. It takes hours to prepare this column, and my freelance schedule tomorrow will not allow that. Besides, there are some important events coming up tomorrow and it helps to actually mention them before they're already in progress.

Wrigley Field has been a joyful place this summer due to the unexpected success of the Chicago Cubs, but the newly renovated venue will be rocking for a different reason this Saturday night. Foo Fighters have a Sonic Highways World Tour date there, and in a class move, they’ve invited three Chicago-area bands to join them. Cheap Trick is more famous than the punk-oriented Naked Raygun and Urge Overkill, but all three supporting acts were chosen because they had a major influence on the Foo Fighters’ sound. The concert, which kicks off at 5:30 PM, is sold out, but if you’re in the neighborhood, just stand outside and you’ll hear the whole thing perfectly. That’s what I did for the Paul McCartney and Bruce Springsteen concerts that were held there.

Help is on the way. Anyone who was intrigued by my description of the performances by Phil Angotti and Liverpool at the recent Fest For Beatles Fans - Chicago, and is thinking, "I must experience one of these tribute shows you speak of," will be glad to know that Angotti and some of his musical pals will be celebrating the 50th anniversary of the release of The Beatles' second flick Help this Saturday night at FitzGerald's in Berwyn. Showtime is 7:00 PM.

A second Helping Jay Goeppner, who joined in on Angotti’s Lennon Tribute and Mark Hudson’s Musicians’ Forum on the final day of The Fest For Beatles Fans - Chicago this year, will also be celebrating the 50th anniversary of the release of Help this Saturday. Except he'll be at Colletti’s on Chicago's northwest side. The show starts at  8:00 PM; Colletti’s is located at 5707 N. Central Avenue in Chicago. Goeppner and Angotti have performed together as The Beatle Brothers at a number of clubs in the area.

Jessica Hopper, a Senior Editor at Pitchfork and regular contributor to Spin and The Reader, will be part of a double author event this Friday night at the Women And Children First book store on Chicago’s north side. Hopper will read from and discuss her latest book The First Collection of Criticism by a Living Female Rock Critic; and Suzanne Scanlon will do the same for her latest effort, an “experimental memoir” titled Her 37th Year, An Index. The event takes place at 7:30, and will be moderated by Naomi Huffman, Editor-in-Chief at the Chicago-based publishing house Curbside Splendor. Women And Children First is located at 5233 N. Clark Street.

The Milwaukee-based power pop band Trolley, whose song “I Woke Up” was a Coolest Song In The World pick on Little Steven’s Underground Garage syndicated radio show, will be opening for Pugwash on September 18 at McAuliffe’s in Racine, Wisconsin. The gig will find Trolley showcasing songs from their upcoming new release, Caught In The Darkness.

Ain’t never gonna do it without the fez on. Whether you wear a fez as a tribute to Steely Dan or Matt Smith’s 11th Doctor on Doctor Who, The Elgin ArtSpace Gallery has you covered. FezFest 2015,  created by the people at Dangerous Brains, is being described as "an interactive celebration showcasing the Fez in art, history, and pop culture.” There’s an opening reception at the gallery from 6:00 to 10: PM on September 11.

Chicago firefighters did an amazing job on Wednesday of keeping The Second City's Main Stage from going into a permanent blackout. As reported by Tina Sfondeles in today's Chicago Sun-Times, an extra-alarm fire started in the Adobe Grill, which is located in the same building as The Second City, and caused a lot of damage to the world famous venue's offices on the second and third floors. The firefighters took great care to save the Main Stage, which has been home to countless iconic comic actors over the decades.

Even though there were rumblings that this year's Abbie Hoffman Died For Our Sins might be the swan song for the Mary-Arrchie Theatre's annual celebration of the original Woodstock spirit, it was still a shock to read the news in the daily papers. Worse yet, the Mary-Arrchie itself, which has staged critically acclaimed productions of Tennessee Williams' The Glass Menagerie; Tracy Letts' Superior Donuts; and the riveting Viet Nam War drama Tracers,  is going away after one final (its 30th) season. Chicago Sun-Times theatre critic Hedy Weiss quotes Artistic Director (and Abbie Hoffman impersonator) Rich Cotovsky as explaining, "We're losing our space at Angel Island at 735 W. Sheridan, which we've called home for 26 years, so our 30th anniversary feels like the time to bid farewell."

The current season will continue into 2016 but apparently won't include an Abbie Fest. Cotovsky also spoke to Chicago Tribune theatre critic Chris Jones, noting, "It's not a bad thing. It will take a weight off my back.We struggled and fought to do what we thought was best. And now I can look back and say, 'Wow, we did all that." Cotovsky isn't likely to sit around counting flowers on the wall. He's got a day job, and has had small roles in Shameless and other TV series, as well in plays like Hellcab at other theatre companies. Still, the Mary-Arrchie, with its in-your-face productions and rebellious spirit, will be sorely missed.
Posted by Terry Flamm at 9:31 PM