The Jigsaw Seen - “Have A Wonderful Day” 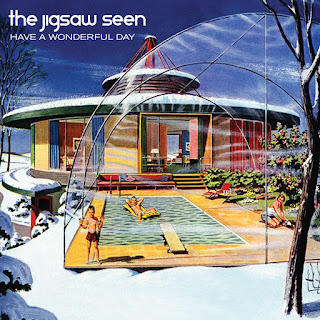 It doesn’t take long to realize the title of this hard-edged new single from The Jigsaw Seen is laced with sarcasm. Described by lead vocalist and songwriter Dennis Davison as a State Of The Union address that turned sour, “Have A Wonderful Day” is a psychedelic doomsday clock set to a catchy melody. “Tamper with perfection,” Davison sings, protesting the way we abuse the environment. “Turn it to pollution.” Jonathan Lea backs these sentiments with his powerful guitar playing, and bassist-keyboards player Tom Courier’s engaging piano work augments a slower interlude.

The single also includes a new mix of “We Women,” an acerbic but irresistible look at the war between the sexes composed by Davison and propelled by Teddy Freese’s steady drumming. It originally appeared on Old Man Reverb, the most recent in a line of well-received albums from this band over the past few decades. “Running To The Convent” is a little-known garage rock gem by the English band Dry Ice that The Jigsaw Seen obviously had a blast covering live at radio station KFJC.
The Jigsaw Seen will be out touring the U.S. in the next few months.
Posted by Terry Flamm at 10:58 PM