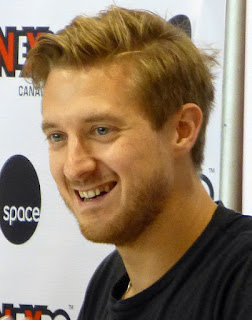 I didn't have enough time to create a post today. Here are a few items from last Friday's Slumgullion that are still relevant.

Wizard World Comic Con Chicago has arrived at the Donald E. Stephens Center in Rosemont and will run through Sunday. Billie Piper and Arthur Darville from Doctor Who are among the many celebrity guests. I’m calling it the Rory Williams Comic Con Chicago because Darville, who played that character on the sci-fi series, isn’t being promoted as much as he deserves for this event.

150 juried artists and over 30 bands will be involved in the first ever West Loop Art Fest, which takes place tomorrow and Sunday on Washington Boulevard, between Halsted and Aberdeen. There will also be food vendors, beer and wine tents, and family-related activities. Admission is $10.

Philamonjaro Studio will present an opening reception for its exhibit featuring Howard Greenblatt’s photos of Tut’s at the Blues Heaven club tomorrow from noon to 3:00 PM. Tut’s played host to some of alt rock’s best bands—including Los Lobos, X, The Replacements, and Missing Persons, along with Chicago’s best acts—from 1979 to 1984. The exhibit will run for about six weeks. Blues Heaven is located at 2120 S. Michigan Avenue.

The band Frisbie will be performing on Chicago’s Downtown River Walk tomorrow from 1:00 to 3:00 PM. I’ve heard that the bands play by the stairs at LaSalle, but if that’s not the case, just follow the sound of ringing guitars to the right location.
Posted by Terry Flamm at 10:41 PM