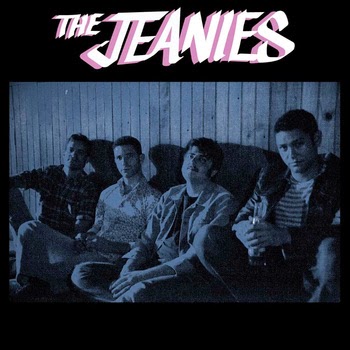 The Jeanies offer muscle-bound variations of power pop on this self-titled debut; supporting strong melodies with guitar-driven arrangements. It’s hard to miss the Tom Petty and Raspberries influences that appear from time to time, but lead vocalist-guitarist and main songwriter Joey Farber never settles for merely copying his heroes. There’s also a willingness to experiment that shows these Brooklyn-based guys have no shortage of confidence.

On “I Seen Her Dance,” The Jeanies forge a classic power pop feel with vocals that echo Petty and the lesser-known but sorely missed Wisconsin band The Lackloves. The harmonies are first rate throughout, although Farber is the only band member credited with singing on the group’s Facebook and Bandcamp pages. “Believe Me Jenny” and “I Think You’re The Wrong One” have that big, irresistible allure of The Raspberries, but The Jeanies go for more of a gritty Rolling Stones approach on “The Girl’s Gonna Go.”

“I’ll Warm You” has more of a modern edge as Farber asks, “Whatcha gonna do when the shadows fall?” He and his mates go even further with the revved-up punk of “Gotta Get Back To Judy” and the slow, angelic “Her Flesh.” The new CD version, available from Kool Kat Musik, comes with a three-song bonus disc featuring the glam rock gem “Nighttime Urges” as well as live performances of “Amilee” and “Believe Me Jenny.”
Posted by Terry Flamm at 7:00 PM