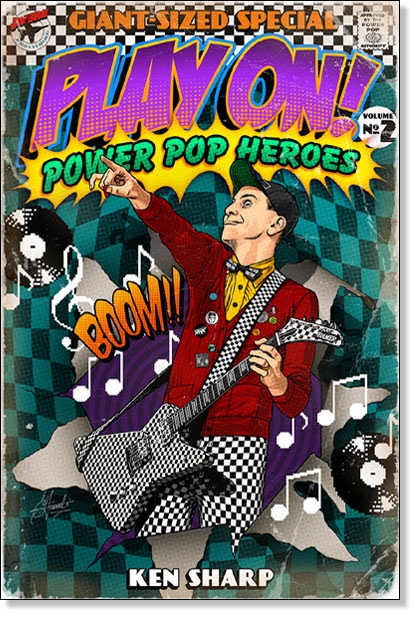 April doesn’t arrive for another 34 days but since that month is like the holiday season here at Broken Hearted Toy, it warrants some advance planning. International Pop Overthrow runs from April 16th through the 25th in Chicago at the Red Line Tap, and Record Store Day, which involves several area stores and at least a few live performances, takes place on April 18th. Which means some tough decisions will have to be made. Plus, the second volume of  journalist Ken Sharp’s Play On! Power Pop Heroes is scheduled to be shipped in late April for those who order it by March 31st. There will be more extensive coverage on BHT as these events get closer, but in the meantime, here’s a brief preview of each.

Over 70 bands will take the stage during International Pop Overthrow’s 2015 run at Red Line Tap; including veterans like Jeremy, The Abbeys, The Webstirs, The Right Tidys, Dave Rave, The Red Plastic Buddha, The Luck Of Eden Hall, The Romeros, The Viaducts, Van Go, Larry O. Dean, The Pralines, and Lannie Flowers. Generally, the weekend showcases feature six acts each, while the week night showcases have five. Admission for each showcase is $10.

The international phenomenon Record Store Day will return for its eighth year on April 18th. The event’s official website has yet to offer a comprehensive list of all the one-of-kind releases that will become available for just that one day, but it does have an inspiring message from Record Store Day Ambassador Dave Grohl. The Nirvana/Foo Fighters musician promises he’ll bring a slab of rare vinyl right to the front door to anyone who wants him to do that. Actually, he reminisces about his favorite record store in Springfield, Virginia when he was growing up. In addition to the collectibles for sale, Record Store Day is also a time when places like Laurie’s Planet Of Sound, Val’s Halla, Vintage Vinyl, and Reckless Records feature live performances by local bands. This year, Purple Dog Records in Naperville is hoping to stage a concert at the nearby Orazio Pub.

In Play On! Power Pop Heroes - Vol.1, noted rock critic Ken Sharp compiled a fascinating collection of interviews with musicians he viewed as “progenitors” of the power pop genre. Musicians from bands like that arrived in the 1960s or ‘70s, and whose music still resonates decades later. With Vol. 2,  Sharp moves on to artists “who built the genre’s foundation.” Sharp revealed yesterday that a colorful portrait of Rick Nielsen by artist Christopher Franchi will grace the cover of this 750-page book, which includes interviews with members of Cheap Trick, Shoes, Squeeze,  XTC, The Posies, Pezband, The Records, and other bands.

Nielsen looks pretty much the same on the cover as he did at the University of Illinois at Chicago where he flipped a guitar pick into my left eye while performing in the school’s cafeteria on a Saturday night back in the 1970s. Those who order Play On! Power Pop Heroes - Vol. 2 by March 31st will also receive over 90 tracks of rare live performances from some of the artists featured in the book. Note: the first volume in this series quickly sold out and is no longer available.
Posted by Terry Flamm at 7:47 PM