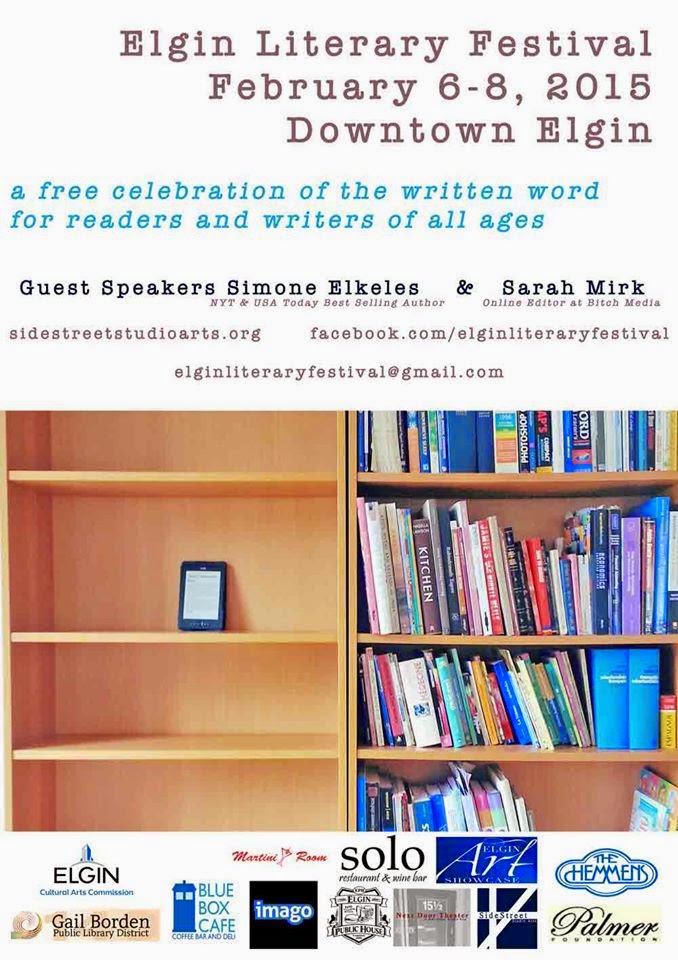 The first Elgin Literary Festival, affectionately known as ELF,  kicked off tonight with an open mic at Blue Box Cafe. The fun will continue throughout this weekend at Blue Box, Martini Room, The Elgin Public House, Solo Restaurant and Wine Bar, Next Door Theatre, Side Street Studio Arts, and other locations in Elgin’s downtown area. Kym Brunner, Cherie Colyer, and Katie Sparks from the writers group I belong to will be among the many authors taking part in panel discussions and giving presentations.

The Neverly Brothers will bring their entertaining and informative showcase of 1950s and 1960s hits to Durty Nellie’s in Palatine tomorrow night.

The Arcada in St. Charles has borrowed Cupid’s bow and arrow and is aiming to entice 1980s rock fans with a Valentine’s Day double bill of Loverboy and The Romantics. And since Valentine’s Day falls on a Saturday this year, it’s a perfect date night.

One if by land, two if by eBay. The Chicago Tribune recently ran a feature story by Randy Lewis with the intriguing headline, “Rare British Invasion photos to hit eBay.” The previously unpublished shots of The Rolling Stones and The Beatles were taken by Bob Bonis from 1964 to 1966. Bonis served as the road manager for both groups and kept these photographs to himself for several years afterward. He passed away in 1992, and some of his work has surfaced in Larry Marion’s books The Lost Photographs of The Rolling Stones and The Lost Photographs of The Beatles. A few were exhibited at the Hollywood Bowl as part of a 50th Anniversary celebration of The Beatles performing there. The photographs will be auctioned on eBay in small batches over the next few years in various sizes, with starting prices ranging $165 through $625. The Tribune noted that 10% of the proceeds will benefit The Grammy Museum (the same people who created The British Invasion: How Beat Groups Conquered America exhibition currently on loan to the Beatles Story museum in Liverpool). Bonis had 5,000 photos in his collection, with over half being of The Rolling Stones. There were 800 of The Beatles. He also took pics of Cream, Simon and Garfunkel, The Lovin’ Spoonful, and The Hollies. No word on whether those photos will be up for sale.

The highly influential Sleater-Kinney has received a hearty welcome from fans and critics since reuniting a while back. Their new CD No Cities To Love is out, and they’ll be at the The Riviera Theatre in Chicago February 17th.

Peter Asher; Chad And Jeremy;  Billy J. Kramer; Mike Pender’s Searchers; Denny Laine of The Moody Blues and Wings; and Terry Sylvester of The Hollies will mix with audience members and sign merchandise following performances on select dates of The British Invasion 2015 Tour. The City Winery show in Chicago on March 7th is among those dates.

Ringo Starr’s next release Postcards From Paradise is now available for pre-order on Amazon.

Graham Nash’s photography exhibit My Life Through My Lens has been extended at the Mumm Napa winery in Rutherford, CA.

Genevieve Schatz from the Chicago-based band Company Of Thieves has embarked on solo career, performing under her first name. She’ll be at Schubas on February 20th.

A word of thanks to Veronica Rundell for giving a shout out to Broken Hearted Toy on her V’s Reads blog. Rundell reads books the way some people eat potato chips, and as someone who’s a member of the same writers group as her, I can attest that she knows the publishing industry inside and out. Especially when it comes to YA and children’s books. She’s an astute critic and always supportive of her fellow writers.

We’ve been eating folks all summer long. The Portland quartet Summer Cannibals has released the single “Something New” from its second album Show Us Your Mind, which comes out March 3rd. It’s a catchy, garage rock number reminiscent of Palmyra Delran and Amy Gore, as well as Patti Smith, who recorded a song called “Summer Cannibals” in the 1990s.

Side Street Studio Arts, the people who are constantly dreaming up unusual fun in Elgin, will present Backwards Broadway next Friday Night. It’s a fundraising event in which men sing tunes usually done by women and vice versa. Proceeds will benefit Youth Outlook, an organization dedicated to supporting gay, lesbian, bisexual, and transgender adolescents.
Posted by Terry Flamm at 10:10 PM