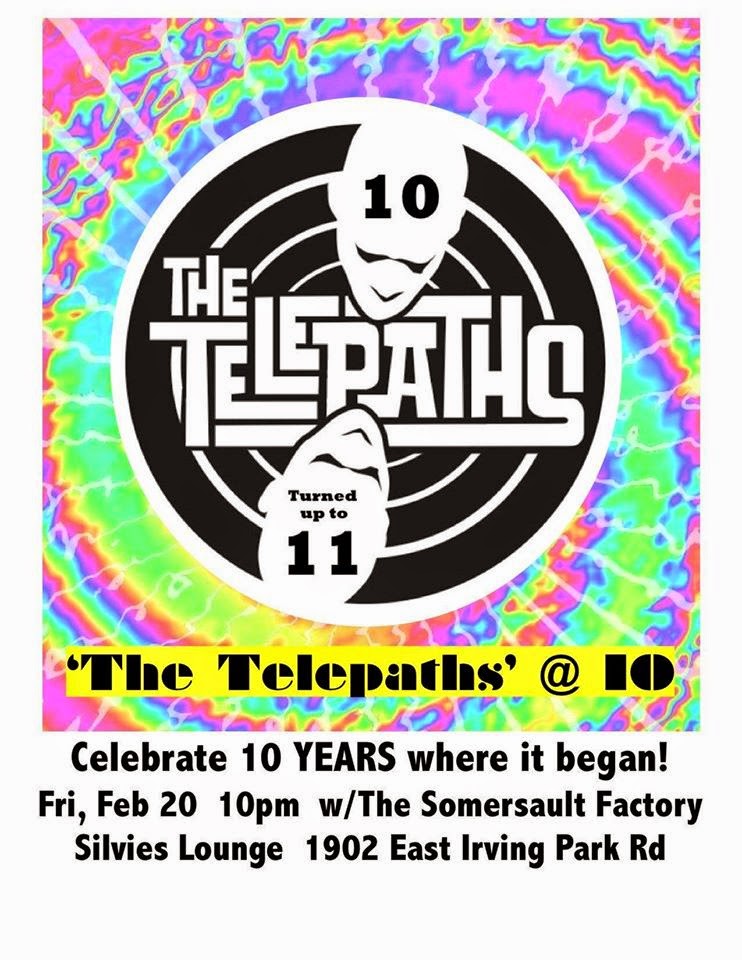 The Abbeys, one of Chicago’s longest-running and best power pop bands, will be performing tonight at 27 Live in Evanston.

Congratulations to The Telepaths, who will be celebrating their 10th Anniversary tonight by performing at Silvie’s Lounge, the venue they played on their very first gig. The show starts at 10:00 PM.

Beatles fans will be gathering next Wednesday, February 25th in front of Capitol Records in Hollywood for a George Harrison 71st Birthday Celebration. Guests are encouraged to bring flowers and candles to decorate Harrison’s star on the Walk Of Fame. Chris Carter, who hosts the Breakfast With The Beatles radio program in Los Angeles, will serve as host, and there will be an open mic.

Here in Chicago, Terri Hemmert will be throwing a George Harrison Birthday Bash on her Breakfast With The Beatles show on WXRT this Sunday morning from 8:00 AM to 10 AM.

On the night before. There’s bound to be a George song or two when Phil Angotti and Jay Goeppner, AKA The Beatles Brothers, perform at Colleti’s in Chicago tomorrow night, February 21st. These guys have been performing together for over 25 years.

Signal Ensemble Theatre has an added incentive for people to check out their production of Brett Neveu’s Red Bud tomorrow night, February 21st. The critically acclaimed playwright, who has had several hits on the Chicago theatre scene, will be on hand for a Questions and Answers session with audience members after the show.

The Bishop’s Daredevil Stunt Club, whose fun and catchy holiday single “Bad Sweater Christmas Party” was reviewed here last December 17th, will be performing at The Abbey Pub next Thursday, February 26th, along with Crybaby, Po Boy Special, and The Shakin’ Moneymakers. There’s more to The Bishop’s Daredevil Stunt Club than novelty songs, as evidenced by the B-side of that holiday single—a catchy tune called “Never Be Big Stars” that evokes Cheap Trick.

There are just a couple days left to support the Mary-Arrchie Theatre’s IndieGoGo funding campaign  for its upcoming production of Douglas Maxwell’s Our Bad Magnet. The money raised will go toward paying those involved with the production. Reaching that goal would certainly add to the celebratory mood of director Carlo Lorenzo Garcia’s birthday party on Sunday. Our Bad Magnet will run at Mary-Arrchie from March 26th through April 26th.

Throwback Thursday: It’s not just for Facebook anymore. The Double Door on Milwaukee Avenue is hosting an eclectic Throwback Thursday event on February 26th that will feature bands covering The Byrds, The Pixies, Led Zeppelin, and Faith No More. The official Facebook page attributes the Faith No More tribute to “Software Giant, oh my god,” and I’m not sure if that means two bands or that the person who created the page is really impressed with Software Giant. The Lucky Dutch are covering Led Zeppelin and the Geoff Dolce Group will bring The Pixies to life. Singer-guitarist Phil Angotti, who has tribute shows running through his veins; Eric Chial from The Bob Mots and Penthouse Sweets; Mike Zelenko from Material Issue; and Brian Stout will take flight as The Byrds.

Music On Stage will be performing the musical Hairspray tomorrow and Sunday at Cutting Hall in Palatine. Their production will run on weekends through March 8th.

Singer-guitarist Laura Joy has released a video for “Takes A While,” a track from her second EP Between Or Words. There will be a release party at The Hideout on Thursday, March 5th.

Now that the world knows who is on the cover of this year’s Sports Illustrated’s Swimsuit Issue, speculation has turned to which musician will grace the cover of author Ken Sharp’s Power Pop Heroes - Vol. 2 book. The first installment of Sharp’s trilogy devoted to the origins and highlights of the genre sported an illustrated Pete Townshend in full windmill. Since Vol. 2 will have a 37 page interview with Shoes, there could very well be an acrobatic Gary Klebe or one of the Murphy brothers on the cover. Other acts (and possible cover models) featured in Vol. 2 include Cheap Trick, Pezband, The Records, XTC, Squeeze, Dwight Twilley, and The Ramones.

Also on the power pop front, Boston-based filmmaker Justin Fielding’s work on The Power Pop Movie  continues despite the mountains of snow that currently cover his hometown. He’s been posting on Facebook about the interviews he has conducted, which include iconic writer Ira Robbins of Trouser Press magazine.

International Pop Overthrow kicks off its 2015 season on March 6th and 7th at the Cactus Jack venue in Phoenix. Two Chicagoans—Phil Angotti and Tommi Zender—will be on the schedule; along with Lemon Krayola, Carol Pacey and The Honey Shakers, Action Jets, and seven other acts. But no Dave Rave?! IPO moves on to Detroit from April 2nd through the 4th, and later, it stops in Nashville from April 30th through May 2nd. Dave Rave will perform in both of those cities. Chicago - IPO will fall somewhere between Detroit and Nashville but that schedule hasn’t been officially announced yet. I do know from Facebook posts that Larry O. Dean is doing a solo show on April 23rd and The Romeros are performing on April 25th. Both shows are at the Red Line Tap.

I just received a promo disc for Strange Fruit And Veg, the latest mind-blowing collection of various artists from the UK vinyl-only label Fruits de Mer. There’s a mix of original music and eclectic cover versions recorded by current psych and prog bands within these 18 tracks. The highlights include Trojan Horse doing Crosby, Stills, Nash and Young’s “Ohio”; Rob Gould’s take on “Tomorrow Never Knows” by The Beatles; The Crawlin Hex doing the classic “Who Do You Love?” and Vert:x performing “Circles” by Hawkwind. I’ll be doing a full review of Strange Fruit and Veg in the near future.
Posted by Terry Flamm at 8:35 PM