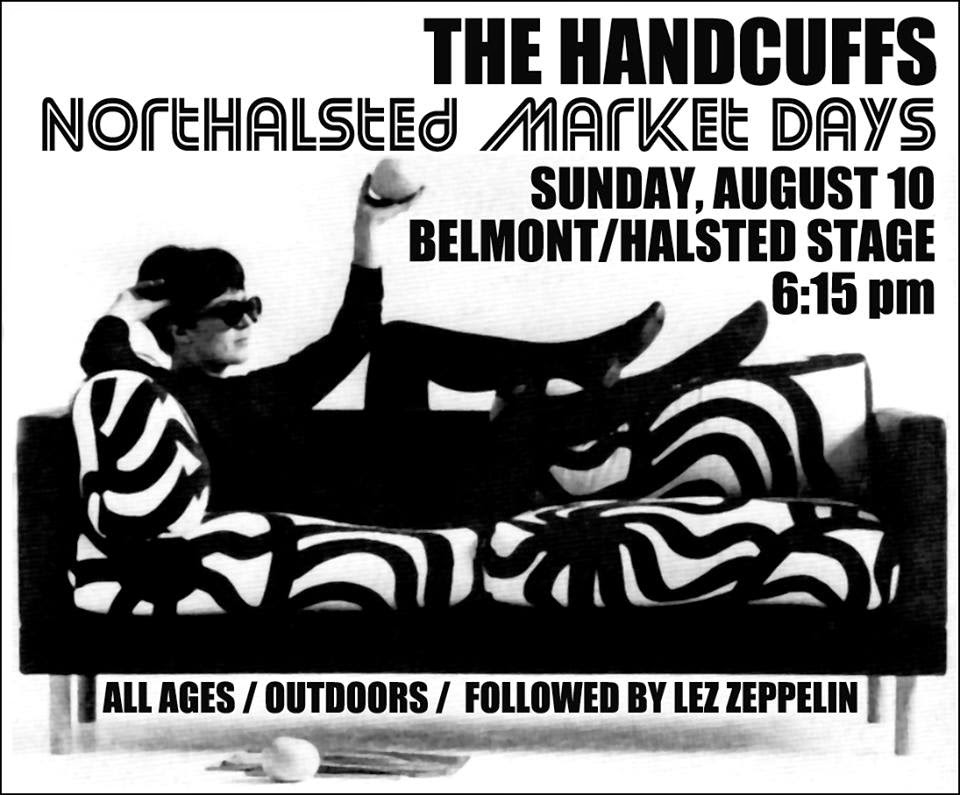 The Luckeys, a Joliet, IL power trio with years of performing experience with acts like Steppenwolf, Montrose, Gentle Giant, and The Griff Band, will be cranking out rock, blues, and funk songs at Mac’s On Slade in Palatine tomorrow night. EXPO ‘76, the witty and eclectic cover band, makes a triumphant return to Mac’s on Saturday, August 16th.

Belinda Carlisle will take time out from performing with The Go-Go’s to headline this Saturday night at the 33rd Annual Northalsted Market Days. Girl Group, Girl In A Coma, and The Locals are also scheduled for Saturday. Sunday’s lineup includes ABBA Salute, The Handcuffs, Catfight, and the tribute band Lez Zeppelin.

Breakfast With The Beatles on WXRT in Chicago will revert back to its 8:00 to 10:00 AM format this Sunday, now that host Terri Hemmert has sufficiently recovered from her recent knee surgery. Hemmert, who has also returned to her regular daytime shift, had been doing a one-hour BWTB for about six weeks. She has likewise been given the green light from her doctor to serve as Master of Ceremonies at Fest For Beatles Fans - Chicago on the weekend of August 15th-17th.

Not another complaint about not being able to see Karen Gillan’s romcom. Not Another Happy Ending, the British flick starring Karen Gillan of Doctor Who fame, is available on Video On Demand in America as of today, and will be released on DVD here next January. Fans can also see Gillan in the current blockbuster film Guardians Of The Galaxy, and in the upcoming ABC sitcom Selfie. Gillan; Matt Smith, who played the 11th Doctor; and John Barrowman, who played Captain Jack, are among the guests at Wizard World Chicago Comic Con, coming up on the weekend of August 21st through 24th.

The hard-edged power pop band Van Go will be at Phyllis’ Musical Inn on Division next Friday night, August 15th.

Fruits de Mer, the UK vinyl-only label that leans toward psychedelic and prog rock, will release its 7 and 7 is box set of seven 45s on September 22nd. It won’t be the first time Fruits de Mer has tapped current artists to offer their interpretations of songs by 1960s bands. The splendid ReEvolution featured various artists reinventing The Hollies throughout an LP and bonus 45 single. 7 and 7 is includes The Higher States covering 13th Floor Elevators; The Chemistry Set doing Love; and King Penguin playing The Byrds. It’s available from the Fruits de Mer website. I should be posting a review in the near future.

Check out all those stickers on his suitcase. Globe-trotting singer-songwriter Brett Newski is currently on a tour that takes him from Marion, IL to Cape Town in South Africa. When I reviewed Newski’s most recent CD American Folk Armageddon, I praised his sharply drawn lyrics and hard-edged folk approach of songs like “Dirt” and “I Want My Best Friend Back.”

To paraphrase Chrissie Hynde, some of us are looking at Big Star. The Second Disc website recently reported that Big Star’s #1 Record and Radio City will be available individually on Amazon on September 2nd in “newly remastered from the original analog tapes” versions. John Fry, the owner and chief engineer at Ardent Records (where these influential LPs were hatched), has given these new CDs his blessing, and Mike Mills of R.E.M. fame has written the liner notes.

And there’s another tribute to Big Star involving several well-known musicians coming up. The Wild Honey and Trunkworthy sponsored event will be staged at the Wilshire Ebell Theatre in Los Angeles on September 27th, and original Big Star drummer Jody Stephens taking part. Mike Mills; Mitch Easter from Let’s Active; Ken Stringfellow and Jon Auer from The Posies; Jason Falkner, Tommy Keene; and The Bangles are among the acts participating.

The Bangles recently noted on Facebook that they checked out the Art Institute while in Chicago for their two-day stint at City Winery. They also announced on their website that they’ll be re-releasing their 1982 self-titled debut, with additional, previously unreleased material. And not to brag, but The Bangles Facebook post with a link to my BHT review of their City Winery - Chicago concert now has 1,383 Likes and 72 Shares.
Posted by Terry Flamm at 12:18 PM