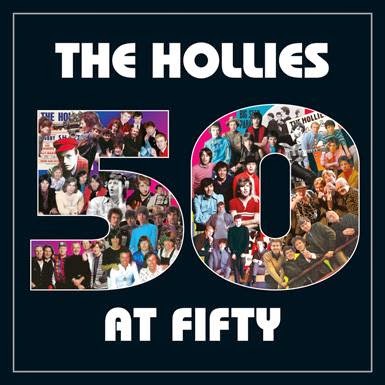 As reported by The Second Disc website earlier this week, The Hollies will release a new compilation titled 50 at Fifty on the Parlophone label in England on September 22nd and in the United States on October 21st. The 3-CD box set will cover the band’s entire history from 1963 up to the present. The current Hollies lineup, which includes original guitarist-harmony vocalist Tony Hicks and original drummer Bobby Elliott, have released two CDs with all new material in the past decade, and some of those songs will be included on 50 at Fifty.

I couldn’t find any mention on The Second Disc or The Hollies’ official website as to whether the box set will come with any kind of special booklet or liner notes. But there will be a brand new song co-written by Elliott and vocalist Peter Howarth called “Skylarks.”

“It’s over fifty years since I first wrote a Hollies song,” Elliott states in the press release, explaining that he co-wrote the B-Side of “Just One Look” with Hicks. “‘Skylarks’ takes us in a new direction—nothing new for The Hollies. It’s back to our inventive roots in many ways.”

A new song that sounds like vintage Hollies would be very interesting indeed. Also, it would be nice to see a Hollies 50 At Fifty t-shirt.

Ellis Clark And The Big Parade and The Bad Examples will share a double bill tonight at Mayne Stage  on the city’s north side. See yesterday’s post for a full preview.

Tributosaurus will become Crosby, Stills, Nash and Young tonight at the Taste Of Polonia festival at the Copernicus Center in Jefferson Park. I saw this same show last year at Taste Of Polonia and these guys definitely know their CSN and Y. Other bands performing there over the weekend include the hard rock cover band JakTripper, American English, Steely Dan tribute act Reely Dan, and Elvis impersonator Rick Saucedo.

People of Fringe-ish descent will also be partying in Jefferson Park this weekend, as The Fifth Annual Chicago Fringe Festival takes places around the neighborhood. There’s a nice write-up by Kerry Cardoz about the event in this week’s edition of The Reader.

Baby, you can drive my car. Harper College in Palatine will be the scene of The British Car Festival  next Sunday, September 7th. Over 500 vehicles of UK origin will be on display and there will be food vendors in case anyone starts feeling peckish. Admission to this British Car Union sponsored event is free, but attendees are encouraged to make a donation to Shelter, Inc, a nonprofit organization dedicated to helping provide housing for abused and neglected kids.

Rick Hromadka, singer-guitarist for the band Maple Mars and the duo Ruby Free (with his wife, singer Lisa Cavaliere), has just finished his first solo effort and is asking for funding via a funny video on the IndieGoGo site. When I last looked, he had exceeded his funding goal by over $400 with 10 hours left to go.

Reggies on State Street in Chicago will be celebrating its 7th Anniversary with a pair of shows on Monday, September 8th. Ken Mode, The Atlas Moth and three other acts will be performing in the Rock Club section; and Mr. Blotto, former BoDeans member Sammy Llanas, Handler, and The Whateverly Bros will be in the Music Joint section. An admission price of $7 covers both shows.

The Muffs will be ringing in the new year with songs from their latest release Whoop De Doo at Reggies on December 31st.

Chicago coed band Magatha Trysty will be performing a bunch of new songs at The House Of Blues next Thursday, September 4th. Singer-guitarist Christopher David told me in an earlier email that the band’s new effort will surprise fans, but in a good way.

The Zombies recently wrapped up a tour of America, but according to a recent Facebook post from lead vocalist Colin Blunstone, they’ll come back over the pond on September 22nd to perform with The Animals at the British Invasion! benefit for The Health Alliance For Austin Musicians. Non-Brits Alejandro Escovedo, Christopher Cross, and other performers are also on the bill. Prior to that, The Zombies will be part of The Day The Music Died concert in Rotterdam in Holland.

Channel 7 is a magic number. As recently reported in the Chicago free paper Redeye, the ABC television network will air a special tribute to the musical lessons of Schoolhouse Rock on September 7th. The ABCs Of Schoolhouse Rock will count down the favorite educational songs and cast a spotlight at the people behind the scenes. Schoolhouse Rock has also been adapted as a musical that ran successfully in Chicago and other areas. There’s a rendition of “Three Is A Magic Number” by Jeff Tweedy on the digital-only Live From The Old Town School 50th anniversary compilation.

Fans of ZZ Top and Jeff Beck were disappointed when the double bill featuring those two acts at Ravinia and other upcoming dates was canceled due to ZZ Top bassist Rusty Hill injuring his hip in a fall. I’m not sure why Jeff Beck couldn’t have still gone on, but at least his fans got some good news in a recent article by Randy Lewis in the Chicago Tribune. The legendary guitarist said he’d like to put together a 50-year career retrospective show sometime in 2015. He’s also considering a new live CD, an autobiography, and a documentary. Meanwhile, EXPO ‘76, one of Chicago’s better (and more humorous) cover bands, has made a tongue-in-cheek offer to fill in for ZZ Top so the tour can still continue.

This Sunday night, Club Foot, at 1824 W. Augusta, is having a Manchester VS Liverpool musical evening presented by Daniel and Lauree. I’m assuming those two individuals are DJs but I could be wrong. Anyway, it sounds like fun.
Posted by Terry Flamm at 5:41 PM