A Big And Bad Night With Ellis And Ralph 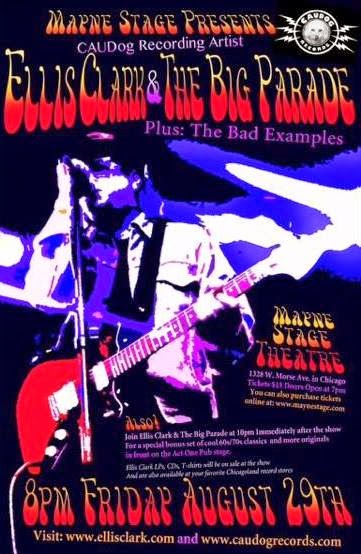 Two long-time masters of the Chicago indie rock scene will share a double bill tomorrow night at Mayne Stage on the city’s north side. Ellis Clark will be working with a new set of musicians he has dubbed The Big Parade (not to be confused with the indie rock trio Big Paraid), and Ralph Covert will be fronting The Bad Examples, the power pop group he founded in 1987. Both artists are prolific and eclectic songwriters who have a wealth of material to draw from for their shows.

Ellis Clark And The Big Parade will perform a pair of sets; the first will be at 8:00 PM on the Mayne Stage and feature original material, and the second will consist of cover tunes and take place at 10:00 PM in The Mayne Stage’s Act One Pub. Clark will likely be playing songs from his 2013 LP Number One release. In my BHT review, I noted that Clark was still intent on exploring new territory, and I had praise for the soulful “I Cant Lose,” the techno-oriented “Glass Half Full,” and the acoustic “Life Hasn’t Killed You Yet.” As for the covers set, Clark seems to fancy a wide range of music, so it should include some intriguing choices. He’ll have t-shirts, vinyl LPs, CDs, and posters for sale.

Covert once again showcased his ability to craft clever lyrics about relationships on The Bad Examples’ 2011 comeback CD Smash Record. A strong sense of melody, along with his vocal style is often reminiscent of Squeeze. In my BHT review of Smash Record, I trotted out my Squeeze comparison for the melodic “Pictures Of A Masquerade” and “Jayne Left Behind,” while also praising the harder-hitting “Big E Chord” and “Devil Is In The Details.”

Tickets for the Ellis Clark And The Big Parade/The Bad Examples show are $15.00.
Posted by Terry Flamm at 10:35 PM