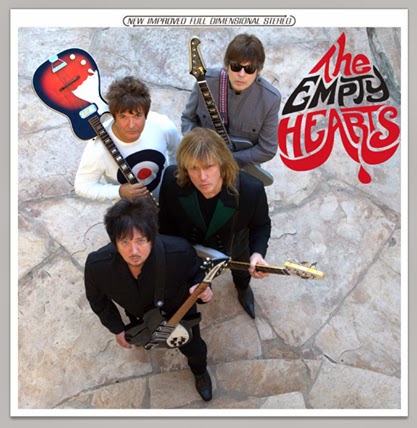 Who’s Who On First? There’s no mention of it on the Durty Nellie’s website, but the Who tribute band Who’s Who will be opening for Hairbanger’s Ball tonight at the downtown Palatine rock club. This according to the Who’s Who Facebook page.

The Alan Parsons Project is performing shows at 7:00 and 9:00 PM tonight at the Arcada Theatre in St. Charles. Herman’s Hermits, starring Peter Noone, with special guests Jay And The Americans, will be there next Saturday night.

Ralph Covert, lead vocalist-guitarist for The Bad Examples, as well as a successful entertainer of young people, is joining forces with guitarist Steve Gerlach, who has worked with The Bad Examples and Tomorrow The Moon, and keyboards player Mike Hartigan at the Filament Theatre on Milwaukee Avenue tomorrow May 11th. Tickets for the Ralph Covert Trio House Concert are $15. The show is at 7:00 PM.

Slumgullion is late this week due to my hanging out at a media/industry event at the new Chicago venue The Throne Room last night. It’s a classy looking rock club with brick walls and wood floors, located above Renaldi’s Pizza and Renaldi’s After Dark at 2827–2831 N. Broadway. The event drew a mix of owner Mark Bruscianelli’s friends and family, along with media types like me and press agent August Forte, for an open bar, food, and a performance by Band Called Catch. Bruscianelli and his wife Kamila Brodowinska Bruscianelli proved to be gracious hosts, working their way through the crowd, and making sure everyone felt welcome.

The Throne Room is in a high-traffic location, within striking distance of Wrigley Field, Lincoln Avenue, Boystown, and the hip shops and restaurants along Clark and Halsted Streets. It remains to be seen what kind of acts will be booked, but having Band Called Catch perform at the preview sounded a promising note. The group, which was also impressive performing on opening night at the 2012 Blue Whiskey Film Festival in Palatine, is led by vocalist-guitarist Tim Frank and vocalist Jess Lyons. Their first set was a mix of well-crafted originals like “When In Rome” and covers like Head And The Heart’s “Lost In My Mind.” They also did a version of Mungo Jerry’s “In The Summertime” that served as a perfect party song. The Throne Room’s official opening in on May 30th.

Local rock covers band The Lennys will be participating in the American Cancer Society’s Relay For Life  on the weekend of June 13-14.

Judging from the resumes of its four members, The Empty Hearts should be one of the more interesting bands set to debut this summer. Wally Palmar from The Romantics is the lead vocalist-guitarist; Clem Burke from Blondie plays drums; Elliot Easton from The Cars plays lead guitar; and Andy Babiuk from The Chesterfield Kings plays bass. Plus, Ian McLagan from the Faces will be a special guest on keyboards. The Empty Hearts will release their first effort in August 5th.

Singer-guitarist Phil Angotti will be performing original material (as opposed to one of his many tribute concerts) at his gig at FitzGerald’s in Berwyn next Friday (May 16th) night. The Possum Hollow Boys are also on the bill.

The Cheetles, a band of seasoned musicians that covers The Beatles straight up, without theatrics, will be performing at 27 Live in Evanston next Friday night.

The hard-edged power pop band Van Go! has a gig next Saturday night at one of its favorite clubs, Phyllis’ Musical Inn. The 7th Year and The Deadly Bungalows are also on the bill. The show starts at 10:00PM.

Drizzle, drazzle, druzzle drome, time for Replacements fans to go to St. Paul, Minnesota. Tickets are now on sale for a concert by the legendary band at Midwest Stadium in St. Paul, Minnesota on September 13th. As-yet-to-be-named special guests will also be on the bill.

Michael Smith, a Chicago-based filmmaker I had the pleasure to interview for the online magazine Chicago DIY Film, is in the midst of an ambitious new project. Smith was promoting his award-winning short The Catastrophe when we talked a few years ago, and now he’s planning on shooting a feature film called Cool Apocalypse.

“It is a simple story about modern-day relationships in Chicago,” Smith explained in a recent email blast. “It will unquestionably be the biggest and best thing I've ever done.”

He’s using crowd-sourced funding that, “will go towards making the film look and sound as good as possible.” A $25 donation will get you a “Thank You” in the movie’s closing titles, as well as the good feeling of supporting a local filmmaker.
Posted by Terry Flamm at 7:37 PM

Thanks a million for the shoutout, Terry!

Thank you very much for the gracious review, Terry! It was a pleasure to have you and we hope to see you again in the near future!