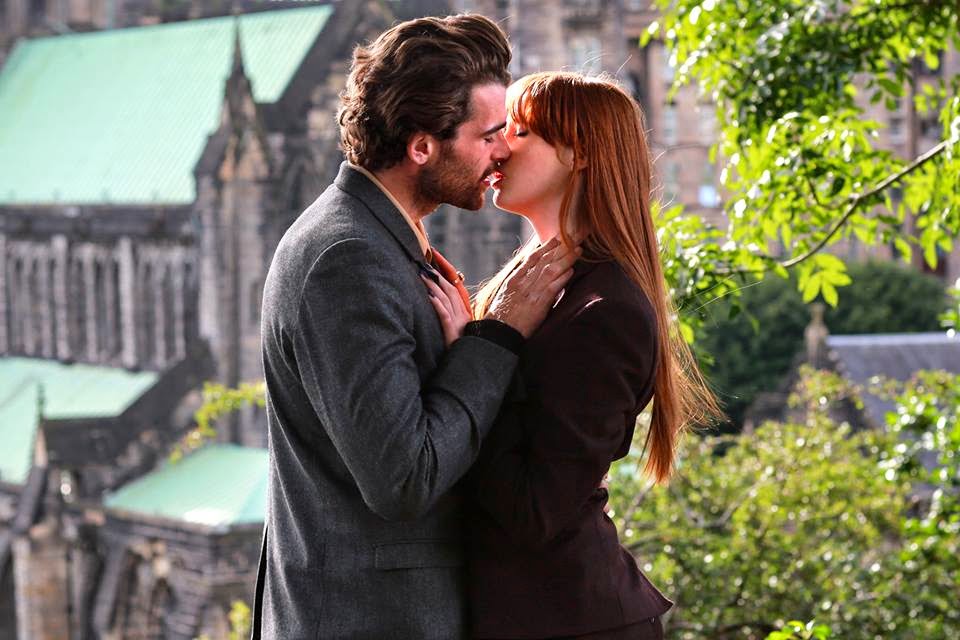 Karen Gillan has nothing to fear from mirrors in this movie.
Photo from the Not Another Happy Ending Facebook page.

I did an AM version of Slumgullion earlier today. Here are a few more items.

Tomorrow is the final day to check out critically acclaimed local artist Nicholas Sistler’s SWEATSHOP exhibit at the Images Gallery on Wilson in Chicago. There will be a closing reception from 5:00 to 8:00 PM, and Sistler will conduct a tour of the gallery at 7:00 PM. Call 773-772-6726 for information.

Old 97’s will likely be performing songs from their new Most Messed Up CD when they headline Hopefest 2014 at Park West on June 21st. So far, there’s no mention of any other acts on the bill. Admission is $30 ($35 day of the show) and $75 will get you reserved seating. Proceeds from the event will support the work of The Chicago Coalition of the Homeless.

Earlier today on BHT I mentioned some of the TV and film stars who will be guests at C2E2 (Chicago Comic And Entertainment Expo) at McCormick Place this weekend. Lots of fun, no doubt, but Doctor Who fans might be looking to the north with a sense of envy. According to writer Dan Casey from The Nerdist website, Matt Smith and Karen Gillan will be among the celebrities gathering at the Calgary Comic and Entertainment Expo. They have a panel discussion scheduled for tomorrow at noon. I don’t have any recollection of Smith and Gillan ever visiting Chicago, but hopefully they’ll consider it someday.

Meanwhile, Gillan’s chilling new flick Oculus has been getting mostly positive reviews in the Chicago press, (I think Redeye was the only paper that panned it) for director Mike Flanagan’s pacing and Gillan’s acting. Critic Michael Phillips of the Chicago Tribune wrote, “Gillan rattles through a considerable amount of exposition in Oculus, and has a way of doing so that it makes the whole premise faintly comic yet completely grave underneath.” Still, I think I’d rather see Gillan’s romcom Not Another Happy Ending if it ever comes to America.
Posted by Terry Flamm at 11:17 PM