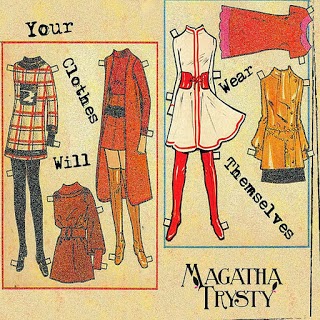 Can they top this? Magatha Trysty fans might get preview of the next CD tomorrow night.

International Pop Overthrow wraps up its 2014 stay in Chicago tomorrow night, April 19th with an impressive lineup of Midwestern bands. Here’s the schedule.

8:45 Bob’s Your Uncle: This four-man group plays hard-edged pop with an emphasis on harmony vocals and strong melodies. Their latest release is titled Xplod-i-mite.

9:30 Magatha Trysty:  It’s been a kick watching this indie rock quartet’s progress since I first saw them at an IPO - Chicago show a few years back. Magatha Trysty’s sound is fueled by the dynamic tandem vocals of keyboards player Catherine Louise and guitarist Chris Bevard and taps into vintage new wave on songs like “Clairvoyant” and “Art Zero.” The group’s Your Clothes Will Wear Themselves came in at number 4 on my Top Releases Of 2012 list, and they’re currently working on a follow-up that Bevard tells me will be even better.

10:15 Semi Twang: This critically-acclaimed Milwaukee band has been performing country/alternative music since 1985. Lead vocalist John Sieger is a prolific songwriter whose compositions have been covered by The BoDeans, Robbie Fulks, Dwight Yoakam and others.

11:00 The Pounders:  IPO founder David Bash recommends this Detroit band to people who like “high energy pop with a dash of jangle.” Their influences includes Elvis Costello, The Who, Burt Bacharach, and Radiohead. The Pounders released the full-length CD You And What Army, featuring the singles “Please Operator” and “The Latest Fashion” in 2011.

11:45 The Romeros Charismatic lead vocalist-guitarist Mike Vanderbilt performed a solo IPO-Chicago gig a few nights back, and he returns tonight with his garage rock band The Romeros. This marks the 10th year they’ll be gracing IPO - Chicago with energetic songs like “You Got Me” and “Brand New Girl” from their two CDs. A fitting act to bring this annual festival to a rollicking finale.
Posted by Terry Flamm at 11:50 PM