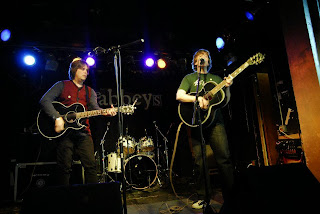 Formed by vocalists-guitarists Jeff Janulis and Mike Cohen, The Abbeys are veterans of the Chicago music scene, and have played every International Pop Overthrow since the festival started coming here in 2001. Listening to their amazing harmonies and ringing guitars the Red Line Tap this past April, it was evident how much Janulis and Cohen have meshed as performers. They also have a side project called The Everly Hillbillies that has been picking up steam lately.

The Abbeys’ new Please File Under: “Twang” EP doesn’t have the harder-edged power pop sound I remember hearing at the IPO-Chicago gig, but it’s a relentlessly catchy and fun effort nonetheless. Five of the six tracks were composed by Cohen, who has an admirable knack for wrapping clever lyrics within infectious arrangements. “Nobody Moves,” a slap at the narrow-minded crowds performers occasionally encounter in rock clubs, gallops to a rockabilly beat reminiscent of The Elvis Brothers. In fact, it was Graham Elvis who suggested Cohen team up with Janulis several years ago.

Cohen also slings a few barbs at C&W themed amusement parks on “Johnny Cash Station,” which has more of a southern rock feel, while the touching love song, “Say Them With Me” has Everly Brothers style vocals and takes a homespun Americana approach. “Alone In My Room” references Brian Wilson’s gift for spinning gold from his solitude, and The Abbeys close with an elaborate take on “Little Submarine,” which was originally done by The Webstirs.
Posted by Terry Flamm at 11:13 PM