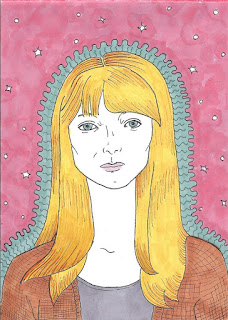 The St. Patrick’s weekend celebration kicked off tonight with a rare performance by Celtic rock band The Drovers at The Abbey Pub. The group still has plenty of fans despite an extended absence from recording or performing, so a packed house it pretty much guaranteed. There’s no telling if this show is a one-time treat, but let’s welcome back The Drovers while we can.

Phil Angotti’s probably not an Irishman, but his CD release show for Life And Rhymes at Martyrs tonight will feature a number of special guests who’ll help him introduce this latest effort. The show starts at 10:00 PM. Angotti will also be doing a joint show with Ellis Clark at Redline Tap on April 20th as part of International Pop Overthrow - Chicago.

If you’re downtown tomorrow for the St. Patrick’s Day Parade, you could fly over to the Chicago Cultural Center and become the next Superman or Sue Storm from the Fantastic Four. Project Onward, a studio created to help artists with mental and developmental disabilities, is holding a Super Hero Portrait Slam tomorrow from 11:00 AM to 4:00 PM. The charge for a single portrait is $20, and you can reserve a sitting in advance by calling 312-744-8032 or sending an email to info@projectforward.org. Samples can be viewed on the studio’s Facebook page.

The Chicago Rovers will be stirring up some some St. Patrick’s style fun tomorrow night at Reggies on  State Street, starting at 9:30 PM.. The $10 admission price includes an Irish buffet. The band has a 6:00 PM to 10:00 PM gig at Horseshoe Casino in Hammond, IN on Sunday.

Fountains Of Wayne have an acoustic show coming up at The Old Town School of Folk Music on April 20th.

Some of the artists who contributed to the Fruits de Mer label's vinyl Re-Evolution Hollies tribute have posted a link to my review on their Facebook pages. A big note of thanks to them. Reportedly, sales are going well. Keith from FdM informed me that Re-Evolution, which comes packaged as an LP with a bonus 45, can be ordered from the following sites:  Shiny Beast;  Those Old Records; Vod Music; and Norman Records.

Comedy fans around the globe were crushed last weekend when Sunday Morning Coffee With Jeff host/producer postponed the season finale of his weekly internet show. Hopefully, it will all set for this Sunday, and include the two bits I filmed with Kelley. One is a reprisal of the crabby old man Fritz Willoughby character I did on Old Days, and the other is sort of a cameo, since I was a regular contributor to Coffee for a few years, and hope to do more bits in the future.

Mike Braam, a Chicago-based musician who suffered a stroke a while back, has been making steady progress through intense physical and speech therapy, according to a recent Facebook post by his brother and band mate, Scott. The Braam Brothers, which also includes Tom Braam, have put out a number of indie rock CDs. Scott noted that his family is grateful for the outpouring of support from Chicago's music community, and asks for continued best wishes and prayers for Mike.

Also, best wishes to singer-guitarist Thom Sebastian for a full recovery. In addition to his solo work, Sebastian has recorded with Phil Seymour, and contributed a cover of "Mumbo Jumbo" for the Squeeze tribute album, If I ...3x on Burning Sky Records.  He's actively working on various projects.
Posted by Terry Flamm at 11:27 PM