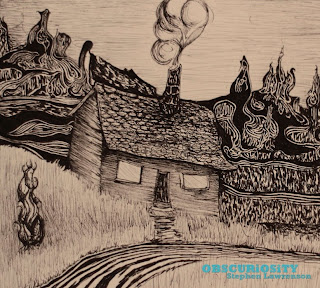 There’s a philosophical bent to Stephen Lawrenson’s latest release, OBSCURiOSiTY, as well as a do-it-yourself attitude. Lawrenson plays all the instruments on 10 melodic songs that deal with finding one’s place in the world, as well as struggling to express love in its truest form. His appealing voice (frequently layered to a lush effect) evokes Jeff Lynne of Electric Light Orchestra and is well-suited to these power pop arrangements.

The catchy title track has an exotic feel as Lawrenson wonders, “Have I lost control, or did I ever have it?” The hard-hitting “Your Karma” depicts a selfish person who creates a trail of disaster, while the lilting and seemingly autobiographical “Small White House” celebrates the simple joys a family finds together over the years. On “Words To Say,” Lawrenson taps into 1960s folk rock to express the frustration of wanting to comfort someone but not knowing how, while “Thank You” is an energetic expression of gratitude to a loved one.

The faster cuts on OBSCURiOSiTY immediately draw attention, but Lawrenson also succeeds with the acoustic beauty of “Edge Of The World,” as well as the orchestral finale, “Pale Yellow,” which features Maggie Lawrenson’s massively over-dubbed vocals in a heavenly choir.
Posted by Terry Flamm at 10:26 PM