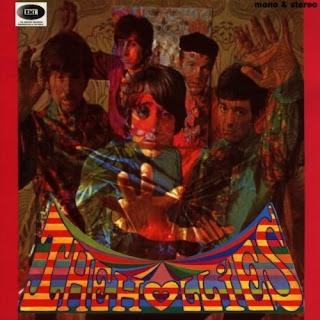 The title of this 1967 LP was no doubt intended to herald The Hollies’ transformation from a band that recorded Top 40 hits written by other people into a creative force on the pop music scene. It continued the adventurous spirit of its predecessor, For Certain Because, and showcased a mature songwriting approach by band members Graham Nash, Allan Clarke, and Tony Hicks. Evolution was the second installment of a trilogy of albums in which The Hollies reinvented themselves without losing the qualities that had made them special.

The variety ranged from “Then The Heartaches Begin,” an emotionally charged song that bordered on hard rock, to the soothing if electronically altered “Lullaby To Tim.” A number of tracks had orchestral accompaniment directed by Mike Vickers. “Heading For A Fall,” one of several songs on the album that dealt with troubled relationships, featured bagpipes, while “Leave Me” (which came later in America, on the Dear Eloise/King Midas In Reverse album) found The Hollies in full garage rock mode.

Sex and its consequences figured prominently in the songwriting this time out. On the energetic “Have You Ever Loved Somebody” (later covered quite well by The Searchers) Allan Clarke sang, “Don’t come back tomorrow and say what we did wasn’t right.” The ambitiously arranged “Rain On The Window” depicted a chance encounter between a man and woman on a stormy day that spins a platonic friendship into a bout of lovemaking that leaves both parties feeling guilty and awkward afterward. Even the risque fun of the catchy pop tune “Games We Play” ended on a cautionary note.

Given all this, it was tempting to think there was some sort of inuendo lurking behind the ornate “Ye Olde Toffee Shoppe,” but it probably was just an innocent tale of a lad buying candy. The British version of Evolution didn’t include the hit single, “Carrie Anne,” which was reportgedly inspired by Marianne Faithful. Whatever, its origins, it was a fun tale of lost innocence that mixed The Hollies’ fabulous vocals with Caribbean rhythms.
Posted by Terry Flamm at 10:29 PM