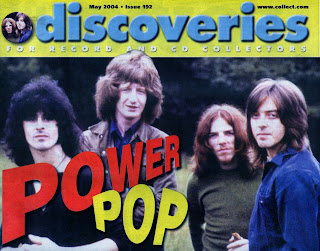 Like Goldmine, Discoveries was a publication devoted to avid collectors of records, CDs, and every imaginable sort of rock and roll related treasure. According to Wikipedia, it was eventually purchased and absorbed by Goldmine. This issue is from May, 2004, and the cover story -- Power Pop: Saving America From Blandness -- was the reason I bought it.

Writer Chris Nickson follows the genre’s lineage from The Beatles through Badfinger and The Raspberries, on to later practitioners like Shoes, Cheap Trick, 20/20, Pezband, Dwight Twilley Band, and The Knack. There are a few paragraphs on British artists, including Nick Lowe, The Records, and the Motors. Nickson contends that the term power pop wasn’t used across the pond, and that such acts were considered new wave. Nickson explains “power pop has never gone away -- it simply disappeared underground, where it’s remained ever since.”

Elsewhere in this issue, under the guidance of Publisher/Editor John Koenig, there were regular columns like DiscNews, Pondering Aloud, DiscMail, and Stuff I Like. Koenig did a lion’s share of the writing. Scott Blackerby profiled psychedelic rockers The C. A. Quintet; George Paulus shared Record Horror Stories; and Robin Platts did a piece on The New Pornographers. Discoveries also had reviews and of course, several pages of rare records for sale from vendors throughout North America.
Posted by Terry Flamm at 10:26 PM