CD Review: The Honey Pot - To The Edge Of The World 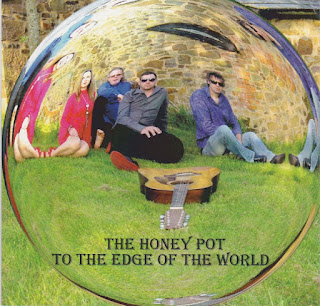 To say The Honey Pot has been influenced by psychedelic rock bands of the 1960s would be an understatement. It’s more like this English band, which formed in 2012, found a hippie cookbook and started using its vintage recipes for creating music. The results might seem out of synch with a lot of modern trends, but for fans of this particular genre, The Honey Pot’s 14-track debut, To The Edge Of The World, is a trip worth taking.

“Roses Will Grow,” with its distorted guitars and lyrics like “The shadow of a dream passes by,” recalls Cream’s “Tales Of Brave Ulysses.” On “Tuppence For Your Thoughts,” The Honey Pot adds a dash of prog rock, along with some electrified folk, while the coed vocals on the title track and regal-sounding “Comfy’s Honey Jar” revive the spirit of Haight-Ashbury Jefferson Airplane. The harder hitting “Here Come The Dreams” and “How Many?” find The Honey Pot appealing to more modern tastes without slipping out of their favorite decade.
Posted by Terry Flamm at 10:49 PM