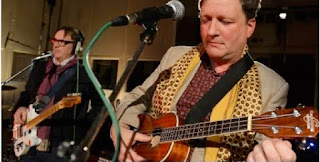 It’s safe to say that no band has caused more of a stir with its first recording than The Beatles did with Please Please Me. Even more amazingly, John, Paul George, and Ringo created their world-changing effort in a span of just 12 hours. BBC Radio 2 came up with a fun and ambitious idea to mark the 50th Anniversary of that recording by inviting several musicians to Abbey Road Studios to recreate the LP, track by track. The results could be heard live on the Beeb yesterday.

Glenn Tilbrook and Chris Difford, who as chief composers for the band Squeeze, have been compared to Lennon & McCartney by numerous critics, brought their distinctive harmonies to the LP’s title track. They were joined by Paul Jones on harmonica. Singer-guitarist Paul Carrack, who spent some time in Squeeze back in its early days, turned in an acoustic-based “Misery,” and Mick Hucknall’s heartfelt “Anna (Go To Him)” was another highlight.

Stereophonics offered a rollicking take on “I Saw Her Standing There” that was true to the spirit of the original, while Joss Stone, I Am Kloot, and singer-guitarist Gabrielle Aplin performed slower versions of “A Taste Of Honey,” “Chains,” and “There’s A Place,” respectively. Other artists involved included The Merseybeats And Friends, Beverly Knight, and Graham Coxon. I wish I could say I know all this from being there, but the clips can be found on the BBC Radio 2 website.

Correction: Yesterday on BHT, I stated that John Anderson’s Born In Chicago blues documentary received its world premiere at the SXSW Film Festival over the past weekend. Of course, that would be impossible since SXSW doesn’t take place until March. That’s what I get for trying to squeeze in a blog post at 11:30 at night, following a long work day. The error has been fixed.
Posted by Terry Flamm at 11:34 PM