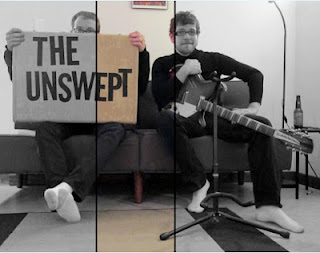 Nearly 1,000 posts and never an unflattering photo of a performer.

The Unswept, a pair of cousins from Sheffield, England, who now reside in Chicago’s Logan Square neighborhood, have a new digital release titled, Surf Song EP. Charlie and Ryan O’Brien made a strong impression at last year’s International Pop Overthrow - Chicago, and are planning on performing at IPO again this year. Surf Song, which has chiming guitars and quirky vocals, should be available on flexi-disc by then.

Chicago Cinema Society is hosting screenings of David Grohl’s new documentary Sound City over the next few days at The Patio Theater at 6008 W. Irving Park Road. The Foo Fighters founding member discovered Sound City, a Van Nuys, CA recording studio, and its star-studded list of clients, back in his Nirvana days. Grohl’s been obsessed with it ever since. His film features Tom Petty, James Brown, Neil Young, Paul McCartney, members of Fleetwood Mac, and several other musicians. There’s a 10:00 PM screening tonight and Saturday, and a 7:30 PM show on Monday. Admission is $7.00. There is also a soundtrack available.

Anyone looking to get in the right frame of mind for tomorrow night’s four-band Psychedelic Saturday at Martyrs, should pick up the March issue of MOJO. In addition to a cover story on Pink Floyd (for about the 13,000th time) the magazine also comes with a free CD titled Echoes with 15 tracks of sonic adventures from bands like Temples, Tame Impala, and Django Django.

Also tomorrow night, Ken Stringfellow, a member of The Posies and The Disciplines, as well as an accomplished solo artist, has a gig at Schubas. Stringfellow told me in an interview for the Illinois Entertainer that he never does the same show twice.

The Mary-Arrchie Theatre’s annual Abbie Hoffman Died For Our Sins Festival will be held at a different location this year, as part of the Fest’s 25th anniversary celebration. Look for Artistic Director Rich Cotovsky (channeling the spirit of Hoffman) and over over 50 groups or performers to do their thing at The Den Theatre at 1333 N. Milwaukee Avenue. Abbie Fest runs the weekend of August 16th through 18th. This will be only the second time it has not been held at the Mary-Arrchie’s Angel Island space on Sheridan Road. A number of years back, Abbie Fest was staged at Strawdog Theatre.

In other Mary-Arrchie traveling productions news, the theatre’s highly successful take on Tennessee Williams’ The Glass Menagerie will be getting a Remount at Theatre Wit, starting May 22nd.

Shoes have some live performances coming up in addition to their gig at this year’s SXSW. On February 14th, they’ll be at Ravinia’s Bennett Hall, and on March 9th, they’ll be at McAuliffes Pub, with opening act The Bradburys, in Racine, WI.

It was sad to hear the news that lead vocalist Reg Presley of the fun and influential Brisish Invasion band The Troggs has passed away.

The Del Moroccos, an eight-piece band fronted by lead vocalist-percussionist Gabrielle Sutton and back-up vocalists Sarah Jane Goldstein and Adrienne Stoner, will be performing vintage style rock and roll on Valentine's Day at Space in Evanston. Shake ‘Em On Down is also on the bill. The music starts at 7:30.

There will be more scary stuff and teen romance coming from YA/Paranormal novelist Cherie Colyer. A member of the same ever-impressive writers group that I belong to, Colyer just learned that the sequel to her debut effort, Embrace has been picked up by Omnific Publishing.

Red Jacket Mine incorporates elements of mainstream artists like Billy Joel and Steely Dan into consistently melodic pop songs on its latest release, Someone Else's Cake. “Engineer,” on the other hand, is a fun romp through T-Rex territory. The energetic title track also stands out, along with the blue-eyed soul of “Better To Be Broken Than Blind.” On “Have You Got A Permit To Preach On This Corner?” Red Jacket Mine sets religious satire to a toe-tapping Country & Western arrangement.

It’s always encouraging to find a new rock magazine in print. The Reckless Records store on Madison in downtown Chicago had a fresh delivery of What’s The Smack, a New York/Philadelphia based publication from ‘stachemedia and Red Flag Media. This month’s 40-page issue has colorful graphics, articles on The Joy Formidable and Jim James, plus CD reviews. It looks like What’s The Smack has been around since late last year. Welcome.
Posted by Terry Flamm at 11:55 PM