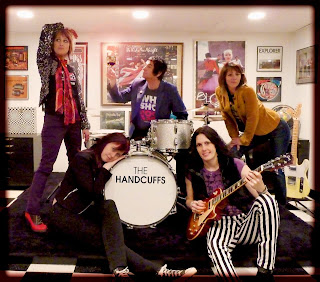 Anyone looking to get into the spirit of Presidents Day should check out the four-band lineup headed by Van Go elected for Subterranean this Sunday night. The Presidents Of Rock! will also include Fair Moans, Collectors, and In Threes. The music kicks off at 8:00 PM. Subterranean is located at 2011 W. North Avenue in Chicago.

The Handcuffs have parted ways with veteran guitarist-keyboards player Ellis Clark and are welcoming new guitarist Susie Q. That leaves drummer Brad Elvis as the sole male musicians in the band. Clark meanwhile has been working his new solo effort and keeping an active profile on the local club scene.

The dB’s are asking their fans to support Jake Gorst’s quest to get funding on Kickstarter for his art-related documentary, The Rise And Fall Of Books. Gorst, who designed the power pop band’s first website, has already shot and edited a profile of the various ways artist Buzz Spector incorporates books into sculptures, photographs, and drawings. Now he needs financial help for post production, festival submission fees, and DVD manufacturing. The Rise And Fall Of Books features The dB’s on its soundtrack, and backers can get some cools perks for helping out.

FitzGerald’s  in Berwyn, long known for presenting Americana music, will be the scene of the sixth annual After Brunch Bash next Sunday, February24th. The coed country music/swing/doo-wop quintet, The Teflons, fronted by a trio of female vocalists, and bluegrass trio Sunnyside Up, will be providing the entertainment at this year’s event. Food can be ordered from the nearby Capri Ristorante.

Hired Goons will be at Silvie’s Lounge on March 2nd. The comic rock band draws inspiration in equal parts from The Ramones and The Simpsons TV show, and is currently working on a follow-up to its fun debut, Everything’s Coming Up Milhouse. They might even do some new material at their Silvie’s gig.

One of my all-time favorite French garage rock bands, The Plastiscines, have announced on their Facebook book page that they’ve recorded a new single. They haven’t revealed the name yet, but hopefully, it’s from a new CD that will be out soon.
Posted by Terry Flamm at 11:44 PM