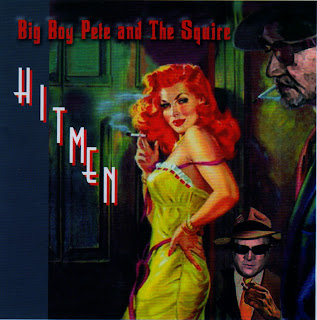 This past Friday’s Slumgullion was devoted to all things Beatle in honor of George Harrison’s upcoming 70th birthday. But there are some other happenings worth noting.

The new CD Hitmen by Big Boy Pete and The Squire is an unlikely alliance between 1960s British recording artist Pete Miller and New York-based producer/musician Christopher Zajkowski, who has recorded a number of power pop/psychedelic albums under the moniker, The Squires Of The Subterrain. Miller crafted the infectious melodies decades ago, and Zajkowski has updated the lyrics, often with an eye toward modern politics. Zajkowski played guitar, drums, and bass on the recordings, while Miller provided the quirky vocals. Billed as “A collaboration between two certified sanctified psychedolics,” Hitmen can be ordered Rocket Racket Records.

The dates for this year’s International Pop Overthrow - Chicago haven’t been established yet, but the celebration of power pop and indie rock is likely to be staged here around the third week of April. In the meantime, this look at two of the acts scheduled for International Pop Overthrow - New York will provide prime examples of IPO founder David Bash’s knack for finding new talent. Brooklyn’s The Thigh-Highs tap into 1960s British Invasion pop for catchy songs like “Alice On The Moon” and use cool retro art for promoting their gigs. New York trio London Egg pursues a harder-edged power pop/blues sound on “Steal My Love” and go acoustic on “Fool Again.” I picked these bands because their names sounded interesting, but there’s sure to be several other worthy acts on the IPO - New York schedule. Can’t wait to see what Bash cooks up for Chicago.

Congratulations to musician/journalist/comic artist Dan Pavelich on his strip Just Say Uncle being signed  by Universal Press Syndicate for its GoComics website. Pavelich is asking people to support his efforts by subscribing to Just Say Uncle and clicking on it ever time it pops up on Facebook. You can subscribe by signing up to receive Just Say Uncle via email at GoComics.com free of charge, but there is also a paid subscription for $11.88, which allows you to subscribe to any other strips you want as well.

Singer-songwriter Phil Angotti, whose last effort was the introspective but engaging People And Places, recently noted on Facebook that he’s just about finished with the follow-up. Chloe F. Orwell, lead vocalist and guitarist for The Handcuffs, recently joined Angotti in the studio to help out. The Handcuffs  are currently working on their fourth release.
Posted by Terry Flamm at 10:45 PM