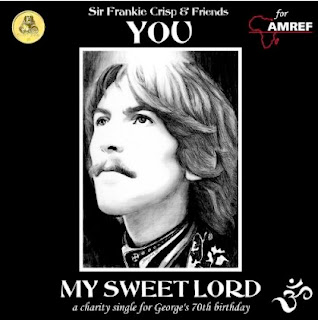 Fans of George Harrison will have a variety of ways to celebrate his 70th birthday this weekend.

B4 And After,  a band comprised of veteran musicians, kicked things off with a Concert For George! at Blues Bar in Mount Prospect tonight, that covered his career from the early Beatles days on through to his solo work.

Pat DiNizio of The Smithereens will be performing Beatles songs at the Sears Corporate Center in Hoffman Estates tomorrow night as part of a fundraiser for the Hoffman Estates Loyal Parents Group. The Center is located at 3333 Beverly Road, the event kicks off at 6:00 PM.

On Breakfast With The Beatles this Sunday morning on WXRT, host Terri Hemmert will be doing a tribute to the man she affectionately calls, “the not so quiet Beatle.” Regular contributor/Beatles historian Professor Moptop will also be on hand, most likely offering behind-the-scenes looks at some of Harrison’s recordings. Listeners outside the Chicago area can stream the show through the station’s website.

Sir Frankie Crisp & Friends have recorded a digital-only charity single of “My Sweet Lord.”  I’m assuming the cover art is by Georgina Flood, since she posted a link to Amazon on her Facebook page. All proceeds from the sale of  “My Sweet Lord” will go to the AMREF Foundation, to help improve healthcare in Africa.

Flood also designed the official t shirt that will be given to the first 300 people to arrive at the Hard Rock Cafe in New York’s Times Square this Sunday when Q104.3 DJ Ken Dashow hosts a Breakfast With The Beatles celebration of Harrison’s 70th birthday. The charming Ms. Flood is flying in from Ireland to be part of the fun.

Fans can also celebrate by checking out  Enya Harrison RA’s  Happy 70th Birthday George Harrison! Facebook page where she’s been posting photos and some of her drawings.

The always informative online newsletter The Second Disc recently reported on the fifth collection of demos by artists signed to The Beatles’ Apple Publishing. All but three of the 24 tracks on 94 Baker Street Revisited  - Poptastic Sounds From The Apple Era 1967 - 1968 are previously unreleased.

Debbi and Vicki and Debbi Peterson of The Bangles were among several musicians performing Sgt. Pepper’s Lonely Hearts Club Band and Rubber Soul at the Wild Honey Orchestra benefit for the Autism Think Tank last Saturday in North Hollywood, CA. John Wicks from The Records and Matthew Sweet also took part. The Peterson sisters had a a sort of Paisley Underground reunion when they met up with Michael Quercio from The Three O’Clock backstage. The Three O’Clock covered “Lovely Rita Meter Maid.”

Director Ryan White has been given permission from Apple Corps to use the songs “I Saw Her Standing There,” “I Will,” “I Feel Fine,” and “Love Me Do” for his documentary about longtime Beatles Fan Club secretary Freda Kelly. Good Ol’ Freda will have its world premiere ar the SXSW Film Festival  next month in Austin, TX.
Posted by Terry Flamm at 11:32 PM