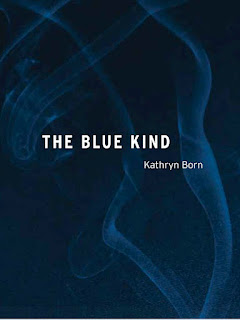 Full Disclosure: I used to write for Chicago Art Magazine. Kathryn Born was the founder and editor of that online publication. She is now coeditor of The Essential New Art Examiner.

Kathryn Born's debut novel, The Blue Kind, drops readers into a chaotic future society where pretty much everyone is morally bankrupt. Rather than offer immediate explanations of why America has degenerated into a color-coded caste system of dealers and addicts, or how her three main characters became immortal, Born instead lets us navigate this rugged terrain on our own.

Alison, the novel's hard-edged main character, appears to be a teenager, but like her untrustworthy husband Cory and their addled mutual friend Ray, she's actually centuries old. Alison drops intriguing clues as she describes the monotony of her endless existence, and the squalid lifestyle she shares with Cory and Ray in an abandoned movie theatre. They have a desperate need to use mind and body altering drugs, as well as make a living by selling them.

Some readers might be disappointed that questions still remain after The Blue Kind has reached its surprise ending. I don’t think Born was interested in creating a thoroughly linear storyline. This is more of a feminist/sci-fi fable where men view their wives and girlfriends as collateral to be used while wheeling and dealing for more power and riches. I have another theory about The Blue Kind, but can’t discuss it without giving away too much of the book. What’s most important is that Alison is a three-dimensional and sympathetic character who’s willing to risk everything to achieve her freedom.
Posted by Terry Flamm at 9:09 PM