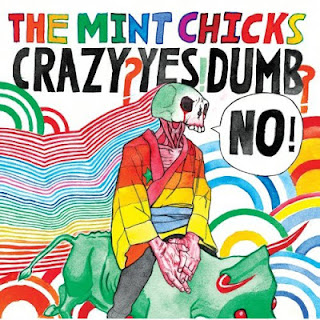 Note: This review originally ran in the January, 2008 issue of the Illinois Entertainer. Editor Steve Forstneger compiled the cover story, which was 25 Songs That Make Chicago Shake. Among the honorees were “Kind Of A Drag” by The Buckinghams, “Oh What A Night” by The Dells, John Prine’s “Sam Sloane,” Material Issue’s “Valerie Loves Me,” “Come Sail Away” by Styx, Cheap Trick’s “I Want You To Want Me,” and The Impressions’ “People Get Ready.”

The Mint Chicks are a quartet of wiseguys who mix punk, new wave, power pop, and bizarre lyrics in a high-speed blender. Crazy? Yes! Dumb? No! was named Best Rock Album at the 2007 New Zealand Music Awards, before the band relocated to the less exotic Portland, Oregon. Their material is consistently manic, although The Mint Chicks, for better or worse, also offer a few twists and turns.

The best surprise is the melodic and slightly mellow “Ammie,” which suddenly places the band directly in The Smiths' territory. The worst is a silly, six minute instrumental called “100 Minutes of Silence.” Along the way, The Mint Chicks serve up a nonstop barrage of energetic gems, including the androgynous pop of “You’re Just As Confused As I Am,” the party song “Real Friends,” and the punk snippet “Don’t Turn Me On Just To Turn Me Off.”
Posted by Terry Flamm at 10:48 PM