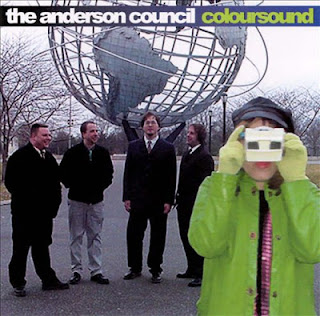 I meant to post this review on Thursday, but a freelance assignment and my Illinois Entertainer deadline prevented that from happening.

The Anderson Council chose a pretty clever band name even if its psychedelic significance isn’t readily apparent to the average rock fan. Whereas Pink Floyd took the first names of blues artists Pink Anderson and Floyd Council, Anderson Council combined the last names. On their 2001 debut, Coloursound, the New Jersey band dove headfirst into the U.K.’s mind-bending pop scene of the mid-1960s.

The opening track, “Sitting On A Cloud,” sets the album’s adventurous course as lead vocalist-guitarist and chief songwriter Peter Horvath spins lyrics like, “The birds in the sky can’t get as high as you do/When you put your to flying.” The vintage Pink Floyd influence is particularly evident on the mid-tempo “Blackboard Of Your Mind” and Syd Barrett type acoustic tune, “Red Chalk Hill.” Other British artists also spring to mind; Horvath channels David Bowie on “Feet Of The Guru,” the harmonies on “Hole In The Sky” are reminiscent of The Hollies; and “Never Stop Being ‘67” has the feel of Revolver era Beatles. There's even a paisley adaptation of a Coca-Cola jingle just for the fun of it.

The Anderson Council has a live performance next Saturday, February 9th at The Court Tavern in New Brunswick NJ.
Posted by Terry Flamm at 6:45 PM