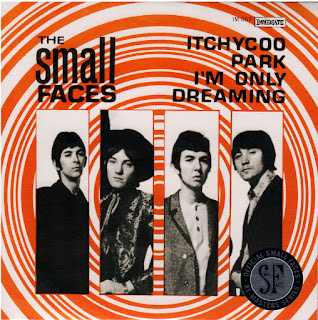 Back in 1967, “Itchycoo Park” was just about the most psychedelic hit single on Top 40 radio. It’s probably the best-known song by The Small Faces in America, since the band was never quite as popular here as it was in England. Written by vocalist-guitarist Steve Marriot and bassist-vocalist Ronnie Lane, “Itchycoo Park” has a seductive melody and synthesized drums that sound like rockets or jet fighters. It’s done in a call and response vocal arrangement, as a lad tries to lead his classmates astray with promises of a mystical destination.

For us kids, it was hard to decipher all the lyrics; we thought “But why the tears there?” was “But why’s the cheese there?” Still, we could certainly identify with “You can miss out school/Why go to learn the words of fools?” The repeated line, “It’s so all too beautiful” sparked visions of a hippie paradise where everyone gets high.

I bought this particular copy on Record Store Day last year at the Reckless Records in downtown Chicago. At $11.49, it was one of the pricier 45 rarities, but it is a limited edition re-issue on the Immediate label, and included a limited edition postcard. 2012 was the year that The Small Faces were inducted into the Rock And Roll Hall Of Fame.