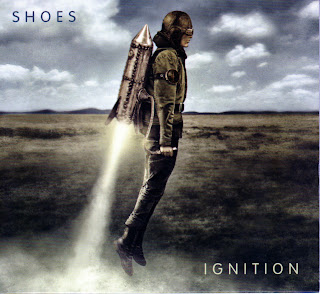 This is the third of three installments of a feature story on Shoes that I wrote for the Illinois Entertainer.

The arrangement of a song also depends on where it fits within the scheme of the CD. If the surrounding tracks have elaborate vocals, the band may opt for a more scaled back approach. Still, there’s that unifying theme throughout Ignition about people taking stock of where they are in life. When Klebe sings, “What’s not to hate about love?” on “Heaven Help Me,” he’s depicting a guy who realizes all the fun has gone out of his relationship. “Where Will It End” includes the line, “I’m getting bored with the same old story,” but the more optimistic “Wrong Idea” notes, “We hit a snag - - that’s all there is to it/It’ll take a little push to get through it.” Klebe and the Murphy brothers believe a more complex view of love and relationships comes as songwriters mature.

“When you’re young and writing songs about relationships,” John Murphy explained. “It’s ‘I’m happy to be in love.’ When you’re older, it’s more of a gray area - - can we make this relationship work? You’re a little more beat up about it.”

For the most part, the 15 songs on Ignition adhere to the melodic approach Shoes has honed over the years. Despite being regarded as one of power pop’s best practitioners, they’re not really sure they belong in that genre.

“We didn’t know what the definition of power pop was,” Klebe said. “And people would say to us, ‘you are’.”

“We really identify with a lot of what power pop is, but I think that’s too narrow a label for us,” John Murphy added.

Jeff Murphy pointed out that while The Beatles are considered the architects of power pop, songs like “Blackbird” hardly fit the description.

“No musician likes to be categorized,” John Murphy contends. “I like tweaking what people think we should be doing.”

In that vein, the fun and hard-hitting “Hot Mess” is a departure for Shoes. It bounces along with a Rolling Stones type of swagger while describing a woman who seems to be an intriguing jumble of contradictions. All three band members laughed when asked about lines like, “She’s been payin’ her dues/With her skanky tattoos/and her sensible shoes.” John Murphy said he initially came up with those quick and silly rhymes just to make the other guys laugh, but some of them wound up staying in the song.

Normally the release of a new CD would would result in a band going on tour to support it, but that might not be the case with Ignition. Shoes have no immediate plans for live gigs, and in their usual independent fashion, they’re taking a wait and see attitude.

“It’s more complicated at our age,” Jeff Murphy explained. “We have families and jobs. We have to work around our drummer’s schedule. But performing is not out of the question.”

“There would have to be some kind of momentum to do live shows,” Klebe added. “We can wait and see if an opportunity comes up.”  Hopefully, the success of Ignition will provide that momentum.
Posted by Terry Flamm at 3:45 PM