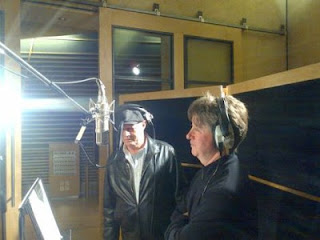 Photo of Bobby Elliott (left) and Tony Hicks from The Hollies website.

A while back, while listening to Breakfast With The Beatles on WXRT in Chicago, I heard host Terri Hemmert mention that Paul McCartney was involved with a new Christmas recording. One of the benefits of listening to this weekly show, in addition to hearing a variety of Beatles-related music, is that Hemmert is a good source of info on upcoming books and CDs. So as a Hollies fan, I was doubly pleased when I recently heard her say that McCartney is one of many artists involved in a new “He Ain't Heavy, He’s My Brother” charity single.
Recording under the name, The Justice Collective, McCartney, Robbie Williams, Glenn Tilbrook from Squeeze, Gerry Marsden from Gerry And The Pacemakers, Shane McGowan from The Pogues, Mick Jones from The Clash, John Power from Cast, Dave McCabe from The Zutons, Chris Sharrock from Oasis, Holly Johnson from Frankie Goes To Hollywood, and a number of other well-known performers are recreating the hauntingly beautiful Hollies hit in order to help families of victims of The Hillsborough Disaster. In 1989, several Liverpool soccer fans were killed while attending a Football Association Cup Semi-Final match with Nottingham Forest at the Hillsborough Stadium in Sheffield. The artists will be backed by the Liverpool Philharmonic Orchestra.

Articles in The Telegraph and The Liverpool Echo don’t mention whether any members of The Hollies are involved in the The Justice Collective version. On the official Hollies website, drummer Bobby Elliott posted a short piece describing how he and guitarist Tony Hicks traveled to London to visit the Metropolis Studios to take part in the project. Elliott and Hicks are the only original members left in The Hollies, who still tour extensively throughout Europe.

“Dylan, the brother of producer Guy Chambers, was on hand to lead us into the control room,” Elliott wrote, and added that, “The atmosphere was relaxed and friendly.”Although Elliott was disappointed that he didn’t get to play drums on the song, he concluded, “It was a good day, as long as TH and I don’t end up on the cutting room floor!”

If The Justice Collective’s version of “He Ain't Heavy, He’s My Brother” is the huge Christmas hit the press is predicting it to be, it will mark the third time this song has shot up the UK charts. It struck gold when originally released in 1969, and went to Number 1 in 1988 after being featured in a Miller Lite TV commercial. The song was also embraced by New York firefighters dealing with the aftermath of the 9-11 attack in 2001.

“He Ain't Heavy, He’s My Brother” was written by Bobby Scott and Bob Russell, based on the motto of Father Flanagan’s Boy Town. Its message of self-sacrifice and always being willing to help others still resonates decades after it was originally written.

The Justice Collective’s version is due out on December 17th.
Posted by Terry Flamm at 11:19 PM