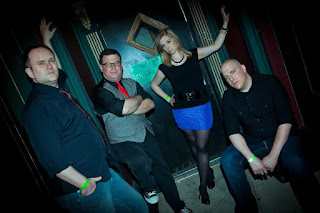 A week ago, I saw The Monkees perform at the Chicago Theatre as part of their current 12-date tour. I found the show to be a very pleasant surprise. My review is currently up on the Illinois Entertainer website.

Subterranean has an impressive four band line-up scheduled for this Sunday, November 25th that includes JIP (who have a new and engaging CD coming out), Magatha Trysty (who just released one of my favorite CDs of the year), Top Shelf Lickers, and Burrows. According to a recent Magatha Trysty email, “if you approach a member of the band and say the phrase MAGATHA TURKEY as enthusiastically as possible, we will give you an AWESOME free gift from our merch box.” So, sort of Christmas and Thanksgiving all in one.

FACE FORWARD The Art of the Self Portrait, an exhibition showcasing 44 artists will be held at The Printworks Gallery, at 311 W. Superior in Chicago. There will be a reception next Friday night, November 30, from 5:00 to 8:00 PM. The exhibition, which includes works by Anne Abrons, Roland Ginzel, Kerry James Marshall, Nicholas Sistler, and others, runs through February 9, 2013.

Based on some recent Facebook posts, French garage rockers Plastiscines are working on new songs. Hopefully, that means their long awaited third release is on its way.

Factory Theatre is celebrating its 20th Birthday with The Gala, at ARTango on December 10th, from 7:00 to 10:00 PM. The group promises a one-night only reading of “The Greatest Production Written by Every Factory Ensemble and Emeritus Member Writer That Can Never Ever Be Produced...Ever!” There will also be a silent auction. Tickets are $30. ARTango is located at 4203 N. Ravenswood in Chicago.

Nice to hear The Hoodoo Gurus will be bringing their multi-band Dig It up Tour back in 2013, but it looks like it’s still strictly an Aussie thing. How about some dates in the U.S.?

Ralph Covert’s Holiday concert with the Dupage Symphony on December 16th at Wentz Concert Hall in Naperville will be a collaboration between the singer-songwriter and the orchestra. Covert is best known for his work in Ralph’s World and Bad Examples.

Popdose, the online pop culture newsletter, has an revealing interview with Andrew Brassell, the 20-something indie singer-guitarist who collaborated with Susanna Hoffs on her recent Someday CD. Brassell, who is also touring with the Bangle, talks about how they met, the set list, and how it feels to be on his first national tour. He also mentions that he’ll be helping out on the third installment of the Hoffs and Matthew Sweet Under The Covers series. Looking forward to that.

Ticket sales for The Rascals’ first concerts in 40 years must be going well. The Capitol Theatre in Port Chester, NY has just added three dates to the 1960s band’s originally scheduled stay at the venue. Actor/musician/radio host Little Steven Van Zandt and lighting/projection expert Marc Brickman are producing the shows, which feature all four original members.

I’ve never heard of Caro Emerald, but apparently the Dutch singer is very popular in Europe, and is looking to duplicate that success in the America. Her video for “Back It Up” has an appealing retro look and showcases Emerald’s smooth vocals. Fans of Lily Allen will likely to enjoy it.

It was nice hearing from Don Weismantel, who once worked on the XBX magazine. Weismantel discovered my Vintage Publication Profile of XBX via a Google search and wrote to say that it brought back some great memories. “Those were some amazing times for the Chicago alternative music scene,” he wrote. “And it was a blast being in the middle of it with XBX.” Weismantel was particularly impressed with the band Social Act in those days and says he was happy to find that former member Ellis Clark is now part of The Handcuffs. “Great to see his amazing talent still going strong. XBX ended up promoting his band Social Act after that interview in the magazine. Great guys to work with.” Weismantel currently creates electronic dance/future pop under the moniker N1nestein (AKA DJ Skilletz.

The Creeping Ivies, a Scottish garage rock duo comprised of singer-guitarist Becca Bomb and drummer Duncan Destruction, are set to release their full length debut, Stay Wild, on the Dead Beat indie label. This follows two chaotic but fun EPs from The Creeping Ivies.
I’m not too familiar with Austin, TX-based singer-songwriter Andrea Perry, except for her catchy and extremely clever Christmas song, “Fat Aunt Bette.”  It has shown up on a few different indie rock holiday compilations. Perry is currently looking to fund her fourth CD via the Kickstarter site, and has a number of friends helping out in the promo video. It must have worked, because she’s already surpassed her $6,000 goal with 26 days left. So there’s still time to pledge a donation, and Perry has some interesting perks for those who help out.
Posted by Terry Flamm at 10:09 PM