The Undiminished Shoes - Part One 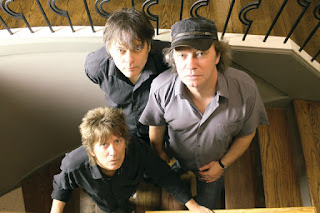 This is the first installment of a feature story on Shoes that I wrote for the Illinois Entertainer a while back.

There was a sense of deja vu as the three members of Shoes gathered in vocalist-guitarist Gary Klebe’s home recording studio in Kenosha to discuss Ignition, their first CD in 18 years. And it wasn’t simply because the writer was the same one who interviewed the band about its Stolen Wishes CD over 20 years earlier at the Short Order Recorder studio in Zion. Klebe, vocalist-guitarist Jeff Murphy, and vocalist-bassist John Murphy have gone this route a number of times before, starting back in the mid-1970s. Regarded as one of the best power pop bands ever, Shoes are veterans of recording albums in their own distinctive style, at their own pace.

“In our ideal world, you do what you want to do, and still have it accepted,” Jeff Murphy explained. “A lot of what we originally did was a reaction of what was going on [musically] at that time. It’s kind of like that now.”

“When you do it, you know what you’re doing is completely non-commercial,” Klebe added, as sailboats drifted on Lake Michigan, just outside the window of his lakefront house.

Devoted fans know the Shoes bio by heart, and it’s also covered in a new book called Boys Don’t Lie: A History Of Shoes, written by music critic Mary E. Donnelly. The band took a DIY approach at a time when it had never been done, by recording and releasing Black Vinyl Shoes on their own in 1977. The surprising success of their collection of 1960’s inspired pop tunes resulted in a recording contract with Elektra, whose executives boldly predicted the first Shoes album on their label would sell five million copies. Despite four Shoes videos being played on MTV the first day the music channel hit the airwaves, Present Tense, released in 1979, fell far short of that goal.

“Elektra’s expectations were distorted by the success of The Cars,” John Murphy recalled, referring to the Boston-based band whose self-titled debut.had gone platinum for the label a year earlier. Klebe likened the situation to a baseball team firing a rookie for striking out in his first time at bat.

“Traditionally, labels were like baseball teams,” he said. “If the kid’s good, you build him through the minors and then the majors. Elektra wasn’t in it for the long haul.”

Shoes were cut loose from Elektra within a few years, but rather than giving up, they built their own studio, launched the independent label, Black Vinyl, and even signed other bands. Their independent spirit has been an inspiration to countless musicians for decades now.

Coming next: Shoes strike out on their own.
Posted by Terry Flamm at 9:47 PM