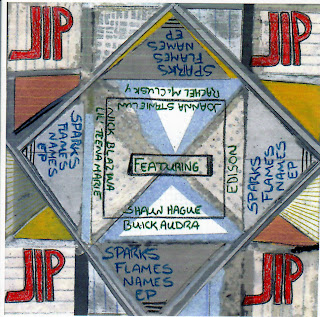 Singer-guitarist Jim Gwynn, the driving force behind JIP, came up with an interesting way to follow the Chicago-based trio’s promising debut, Year X. The newly released EP, Sparks Flames And Names, features a different guest performer on each of the seven tracks. At the risk of obscuring the band’s identity at this early stage, the concept casts a spotlight on Gwynn’s songwriting ability.

Most of the songs are acoustic-based explorations of the various stages of a romantic relationship. In addition to convincingly conveying the exhilaration and heartache of discovering and losing love, respectively, Gwynn gives each song an inviting melody. All of his guests turn in strong performances; joining in on lead vocals, and on occasion, playing instruments.

“Our City By The Lake,” one of the more upbeat songs on Sparks, immediately grabs the listener while Gwynn and Nickolas Blazina craft strong harmony vocals. Rachel McClusky provides compelling vocals on the percussion-driven “Little Light,” while Buick Audra plays guitar and drums, along with creating layered vocals with Gwynn on “Swimming.” The designated single, “Shudder,” is the hardest hitting track, as Gwynn and Joanna Stanielun from the band Halfmoon Mad, portray lovers in an increasingly alienating relationship.
Posted by Terry Flamm at 11:24 PM