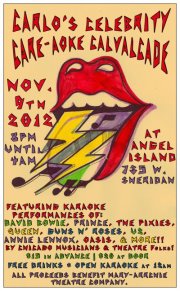 Here are a few local artist reviews that originally appeared in the “Around Hears” column in the Illinois Entertainer. But first a few words about an event going on tomorrow. I’m also going to post this as part of my weekly Slumgullion, but since I sometimes don’t finish Friday’s post until almost midnight, it would be too late by then.

Carlo’s Celebrity Care-aoke Calvalcade, a fundraiser for the upcoming production of The Glass Menagerie at Mary-Arrchie Theatre is being held tomorrow night, starting at 8:00 PM. Tickets are $20. The event will feature local musicians and theatre folks giving performances of famous artists like David Bowie, Prince, and Oasis. The Mary-Arrchie Theatre is located at 735 W. Sheridan Road. Donations can also be made on the indiegogo site.

And on to the local reviews:

Counterfeit i takes pride in being unconventional on A Glimpse, an Eclipse, right down to using titles like “...” and “(r) this.” The band opts for a harder guitar sound than on its first two releases, creating a sonic landscape marked with battlefields, industrial beats, shouted vocals, and abrupt tempo changes. The fast-paced “Smile” evokes Henry Rollins, while “Grey Resolve” sounds like a radio play.

For the most part, Another Oath, the debut from Many Places is singer-guitarist Kevin Rieg, backed by musicians Nick Godden and Matt Hennessey from the band Honest Engines. Rieg gives his acoustic based, meandering rock songs an intriguing edge via electronically altered vocals and random noises he’s recorded. At times, Another Oath sounds like a Dave Matthews Band from an alternative universe. “Long Acre Room” and “Black Houses” in particular, have inventive arrangements, while “Brontosaurus” is an easy-going instrumental.
Posted by Terry Flamm at 11:15 PM