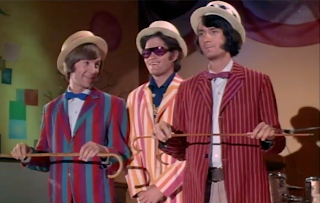 Note: This Slumgullion is meant for tomorrow, Friday, November 16th. I’m just posting it a little early this week.

First of all, a warm welcome to The Monkees, who are in town tonight for a sold-out show at the Chicago Theatre.

The night before Thanksgiving is traditionally a time to go out and party. Here are a couple options for fun next Wednesday, November 21st: American English will cover all phases of The Beatles’ era at the Abbey Pub. Tickets are $10 in advance, $12 at the door. Singer-guitarist Phil Angotti will serve up a cornucopia of original tunes and covers (including some Beatles) when he plays the Haymarket Brewery.

WXRT did an hour-by-hour unveiling of the tracks on Live From The Archives Volume 14 as part of its “New Releases Thursday.” The series features exclusive performances from concerts sponsored by the FM station, or in its studio that have aired over the years. The artists include Wilco, Arcade Fire, Garbage, Head And The Heart, and The Shins. Once again, sales of the CD will help fund the Rock For Kids organization, which seeks to provide music lessons for public school children.

SOPRO is holding its 30th Annual Thanksgiving Blues Revue at Sullivans Irish Pub And Eatery in Midlothian, IL next Saturday night, November 24th. Several musicians will be taking part, including Joey Drada, Frank Anastos,  and Billy King on guitars and vocals; John Falstrom on bass; Scott Bonshire on drums; Greg Wolfman on keyboards; and Doug Lee on harmonica and vocals. The post-turkey bash will also feature vocalists Deb Seitz and Francine Marie, and the acclaimed jazz quartet, The Chicago Fire Horns. Showtime is 9:00 PM; there’s no mention of an admission price in the press material.

Bryn Packard, a funny and talented actor who used to perform in my old comedy group, Famous In The Future, has a major role in the world premiere of Matthew Paul Olmos’s drama, I Put The Fear Of Mexico In ‘em, which is currently being staged by Teatro Vista  at New Dramatists through December 9th. The play, directed by Ricardo Gutierrez and also starring Cheryl Graeff, Miguel Nunez, Charin Alvarez, and Cruz Gonzalez-Cadel, explores the strained relations between Americans and Mexicans.

The video for “Don’t You Think?,”  bodes well for Looking At The Stars, the third LP by psychedelic/power pop band Anderson Council.