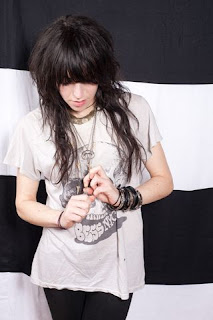 Carlo’s Celebrity Care-aoke Calvalcade, a fundraiser for the upcoming production of The Glass Menagerie at Mary-Arrchie Theatre is being held tonight, starting at 8:00 PM. The event will feature local musicians and theatre folks giving performances of famous artists like David Bowie, Prince, and Oasis. Tickets are $20. The Mary-Arrchie Theatre is located at 735 W. Sheridan Road. Donations can also be made on the indiegogo site.

Meanwhile, Mary-Arrchie’s production of Superior Donuts, which is being staged at the Royal George Cabaret Theatre through November 25th, continues to garner favorable publicity.

It was nice seeing Thomas Conner’s profile of Brad Elvis and Chloe F. Orwell of The Handcuffs (they’re opening for Supersuckers, along with The Dead On tonight at Double Door) in today issue of the Sun-Times. It was also interesting to discover that Brad's pop culture collection includes one of Deborah Harry's shoes.

Dirty Ghosts, the techno-oriented band led by vocalist-guitarist Allyson Baker will be at Schubas this Sunday, November 11th. Baker’s origins are in the Toronto hard core punk scene of the 1990’s, and she continues to bring that raw energy to her new material. I reviewed Dirty Ghosts’ debut, Metal Moon, for the Illinois Entertainer and this blog earlier this year, and noted, “there are darker edges lurking behind the alluring melodies and deep grooves.” Here’s the video for “Katana Rock” from that CD.

As reported by newly crowned Illinois Entertainer editor, Janine Schaults, in the “File” column of this month's issue, vinyl fanatics now have good reason to join other lunatics in the buying frenzy known as Black Friday. Record Store Day, which comes around every year around April, is making a special holiday appearance at independent record stores on the day after Thanksgiving.

Some of the treasures include “Surfin Safari” by The Beach Boys on 10” vinyl; David Bowie’s “The Jean Genie” on 7”; Jellyfish’s Stack-A-Tracks CD; Joey Ramone’s Ya Know? Limited Edition Deluxe Album on CD; and Joan Jett’s Bad Reputation LP with Bonus CD.

Alternative/roots rock group Over The Rhine is introducing some new songs on its current tour of the Midwest. The band has a gig tonight in St. Louis, and tomorrow night in Louisville, KY.

I covered the recent Susanna Hoffs concert at City Winery in Chicago for the Illinois Entertainer. My review is now up on the magazine’s website.

It will be an evening of punk nostalgia when sub-urban insult rockers Tutu And The Pirates open for veteran UK band, The Rezillos at Mayne Stage on Chicago's north side this November 21st. Regal Standout and DJ Dave are also on the bill.
Posted by Terry Flamm at 8:59 PM