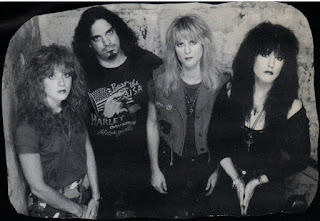 This review originally appeared in the July, 1994 issue of the Illinois Entertainer, which featured Associate Editor Gwen Ihnat’s cover story on Spin Doctors. Bruce Pilato interviewed Michael Been from The Call; Brian Steele profiled local band Agatha; and I had a piece on Bloomington, Indiana’s Arson Garden.

The Lite Beer-sponsored concerts at World Music Theatre that summer included John Mellencamp; Eagles; Allman Brothers Band; Aerosmith; and Lollapalooza, with headliners The Smashing Pumpkins, Beastie Boys, The Breeders, and L7. In his “File” column, Editor Michael C. Harris said of Lolllapalooza, “This is the all-around strongest lineup yet.”

On the club scene, Elvis Brothers and The Insiders had gigs at Cabana Beach Club in Palatine (a few years before I came to live here with my lovely wife); The Griff Band was at The Edge in Midlothian; Eddie Clearwater was at Kingston Mines; Bad Examples were at Connolly’s Pub on Chicago’s southwest side; and FitzGerald’s in Berwyn was holding its 13th Annual American Music Festival. New releases at Rolling Stone Records on Irving Park Road included The Smithereens’ A Date With The Smithereens; Ivy’s Lately; Talk by Yes; and the Reality Bites motion picture soundtrack.

And now, the review. Note: Surrendur Dorothi included guitarist-vocalist Lorrie Kountz, who first gained fame as part of the four-woman band, Bitch. Bitch got back together for the Haymakers Reunion at Durty Nellie’s earlier this year, and Kountz was blazing away on her guitar.

True to its name, Spit is a collection of mad-as-hell lyrics set to an abrasive barrage of punk/metal  mayhem. It’s an improvement over the band’s 1993 debut, Raydio Damage, in that there’s a stronger sense of melody throughout, and lead vocalist Dawn Larue has found ways to put forth the band’s feminist agenda other than sneering.

Her deadpan vocals are especially effective on “Going Numb,” in which a woman is appalled when the man who raped her is set loose on a legal technicality. Her more playful approach adds to the high-speed fun of the catchy “Antbisalesbian” (pronounced Aunt Bea Is A Lesbian -- add your favorite Mayberry impression here). LaRue growls on the angry rock song “Tag,” while guitarist Lorrie Kountz does her patented slash and burn, and Denise Sebo and Vulgar Vic Pedraza pound out the rhythm on bass and drums, respectively.

Occasionally, the sparse lyrics on Spit leave it unclear as to what the band is ticked off about. The meaning is loud and clear on “Rape Whistle,” with its chants of “Hate crimes suck!” but on other tracks, like “Roadkill” and “Diescumyuppie,” taunts like, “trailer trash Barbie” and “u sweaty pig” just come across as abusive. If Surrendur Dorothi can bring a stronger focus to its lyrics, the message will be more compelling.
Posted by Terry Flamm at 10:04 PM