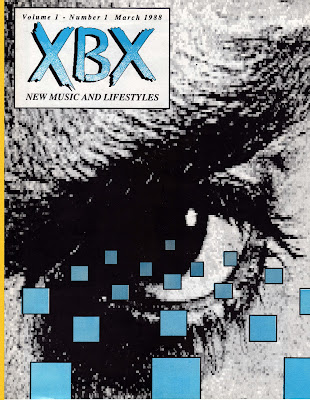 Before moving on to today’s ‘zine profile, here are a few quick messages.

It’ll be four bands for $5 tonight at Quenchers, at 2401 N. Western Avenue in Chicago. Music will be provided by The Sonnets, We Repel Each Other, Coma Boys, and Maxrebo. Show time is 8:00 PM.

WXRT posted on its Facebook page today that R.E.M. has decided to call it quits. Very sorry to hear that.

Sarah Denton, the daughter of veteran Chicago-based rock and roll scribe Tom Lounges, will be taking part in the American Foundation for Suicide Prevention’s Northwest Indiana Walk this coming Sunday at Centennial Park. Anyone interested in helping Ms. Denton reach her $150 fundraising goal can check out AFSP’s Out Of The Darkness Community Walks page.

Originally an Indiana publication that covered alternative music in the mid-1980s, XBX was reborn as a Chicago-based ‘zine in March, 1988. Publisher Donald H. Weismantel (somehow that name doesn’t sound cutting edge) explained the XBX legacy in his Wavelengths column. Subtitled New Music And Lifestyles, the 16-page windy city debut had two feature articles, three columns (including Weismantel’s), Jim Felli’s M.T. Head comic, and a center spread of candid club photos that weren’t as sleazy as the ones you see in some publications these days.

Heidi Mendelsohn, who was listed on the masthead as Acct. Exuctive/Promotions, interviewed Ellis Clark and John Krenger of Social Act (third member Dave Ishiki was absent) about the band’s music, its chemistry, and the Chicago music scene. “It’s like a little family,” Clark told her. “When I see a band like The Insiders get signed, I don’t get jealous about it. I feel good. It gives me more of an incentive, it makes you more positive to know you can make it here.” Those of us who saw Clark blazing away on his guitar as The Handcuffs opened for Blondie last week know he’s still an active member of the family in 2011.

There was an uncredited interview with Promotional Director of Erik’s North, Steve Saban, who talked about the club’s new policy of booking progressive live bands on Wednesday nights. Robert N. Crawford’s Astroscan page covered astrology; and a calendar of concert dates for February and March listed The Dead Milkmen, The Farmers, and October’s Child at Cabaret Metro; The dB’s, also at Cabaret Metro; and Miles Davis at The Vic. The Slugs had a gig at Cubby Bear, Maybe Definitely was at Avalon, and Echo & The Bunnymen were scheduled for Northwestern University.

Don Weismantel of XBX here! Just came across this article from a Google search and it brought back some great memories! Just curious how you came across an old issue? Those were some amazing times for the Chicago alternative music scene and it was a blast being in the middle of it with XBX.

Reconnected with Ellis Clark (now of the Handcuffs) on Facebook a year or so ago. Great to see his amazing talent still going strong. XBX ended up promoting his band Social Act after that interview in the magazine. Great guys to work with.

You can see the current direction that my creative juices have been flowing here: http://facebook.com/n1nestein (be sure to watch the "Untz Untz Bacon" video for giggles). Be sure to stop by and say hi.

Anyway... thanks for making my day and sparking a trip down memory lane.