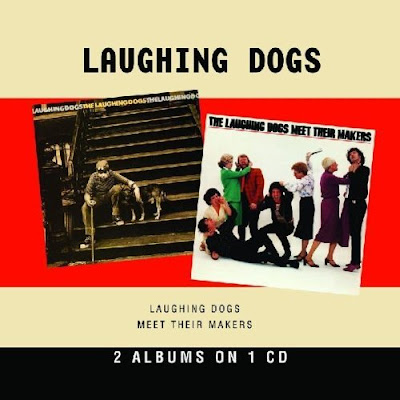 I encountered technical difficulties while trying to post this review yesterday, so here it is now. Hopefully, I'll have another post later today. Note: This review originally appeared in the Illinois Entertainer.

The Laughing Dogs make a belated entry into the realm of CDs with this American Beat compilation of its first two records. Coming out of New York City’s acclaimed alternative music scene in 1979, the band’s self-titled debut of energetic power pop got lost in the shuffle. The Laughing Dog Meet Their Makers, released a year later, found the band going in a new direction.

The Laughing Dogs is definitely the stronger effort. “Get ‘Im Outta Town,” “I Need A Million,” and “It’s Just The Truth” have great melodies and showcase the band’s amazing harmonies. “No Lies” has an easy-going groove that recalls The Rascals, and the harmonica-driven “Reason For Love” also taps into the 1960s.

The Laughing Dogs Meet Their Makers retains the emphasis on strong vocals, but is filled with desperate attempts at a hit single. “Formal Letter” and “Don’t Push It” are highly-polished but generic stabs at mainstream 1980s pop, and the sappy sentiment of “Two Who Are Willing” is annoying. The Laughing Dogs effectively cover The Animals’ “Don’t Bring Me Down,” but other than that, “Melody Love” is the only track that meets the high standards of their impressive debut.