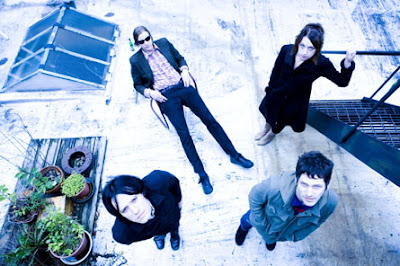 The Ponys may have lost Ian Adams, the versatile keyboardist whose farsifa organ playing provided so much fun on the Chicago band’s debut, Laced With Romance, but they still have a charismatic lead singer-guitarist in Jered Gummere. His energetic and decidedly offbeat vocals enable The Ponys to add humor to their hard-edged performances. Like its predecessor, Celebration Castle taps into garage and vintage new wave, along with a hint of classic rock.

On the melodic “Glass Conversation,” Gummere once again channels Mark Mothersbaugh of Devo, while bassist Melissa Elias adds a mysterious ambiance to the Cure-conjuring “We Shot The World” via her back-up vocals. Elias takes center stage for the freewheeling “She’s Broken,” as Gummere backs her with some furious guitar feedback. More feedback and Nathan Jerde’s powerful drumming underscore the volatile relationship described in “Shadowbox.” The peppy “I’m With You,” with its hand claps and catchy melody, offers a charming take on love as Gummere sings, “I don’t mind what they say/As long as you’re with me and I’m with you.”