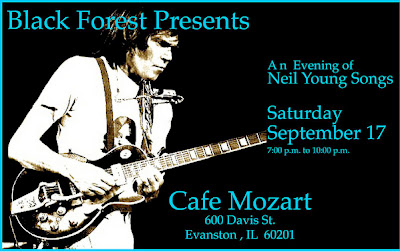 WXRT just announced this morning that Ray Davies will be coming to the Chicago Theatre on November 11th. Word is he’ll be performing a number of classic Kinks songs as well as his solo stuff.

Dot Dot Dot, the Palatine-bred synth rock band that now travels the country entertaining audiences, is marking the passing of the season with a series of Celebrate Summer’s End gigs. They’ll be playing the On The Waterfront festival in Rockford tonight, on the Great Lawn Stage, starting at 7:30. The group has at least eight other dates lined up, including the Guinness Oyster Fest at Damen and Roscoe in Chicago on September 17th.

The New Invaders will be performing 1960s hits from 9:00 PM to 11:00 PM tonight at the Maria SS Lauretana Italian Festival in Berwyn. The concert will be held in the Morton West High parking lot behind Cermak Plaza, at Home Avenue and 23rd Street.

The Lakeview East neighborhood in Chicago will be presenting its Festival Of The Arts on Broadway, from Belmont to Roscoe next Saturday, September 10th and Sunday, September 11th. There will be art, music and food.

On that same weekend, about 50 exhibitors will take part in An Art Affair Around The Square in Palatine. In addition to paintings, jewelry, and stained glass, the event will include food vendors and live music. The folk duo Small Potatoes will perform from 1:00 PM to 3:00 PM on Sunday.

The Music Room will host a meet and greet in conjunction with the Art Affair on Friday night from 6PM to 9 PM at its store in the heart of downtown Palatine. Each artist will display a single work and be willing to discuss it with visitors. There will be hors’ douvres and beverages.

Also in Palatine on September 10th, the Main Library will host a Local Author Fair from 1:00 PM to 3:00 PM. The event includes a panel discussion led by well-known authors who live in the area, and there will be several other authors on hand, including Susan Kaye Quinn, who’s a member of the same Society of Children’s Book Writers and Illustrators group that I belong to.

Ludicrous Theatre Company will be staging The Rocky Horror Picture Show at the Boho Theatre from August 26th through September 17th. There will be a special midnight show on Friday, September 9th. Boho Theatre is located at 7016 N. Glenwood in Chicago. Tickets are $20 - $25, and are available at Brown Paper Tickets Call 1-800-838-3006 for info.

In retrospect, I’m afraid I may have come across as a little flippant in my reference to the late radio personality Jim Stagg in my Vintage Publication Spotlight on WCFL Presents The Teen Set earlier this week. It would have been more accurate to state that I didn’t become aware of the respect The Beatles had for Stagg as an interviewer until recent years. That bond is evident on a CD I bought at The Fest For Beatles Fans a few years back, called The Beatles With Jim Stagg: Behind The Scenes On Their First U.S. Tour 1964. There are some really interesting interviews on the disc.

Singer-songwriter Herb Eimmerman, a member of the international power pop trio The Britannicas, recently announced via Facebook that he has nine tracks ready for his next solo CD.