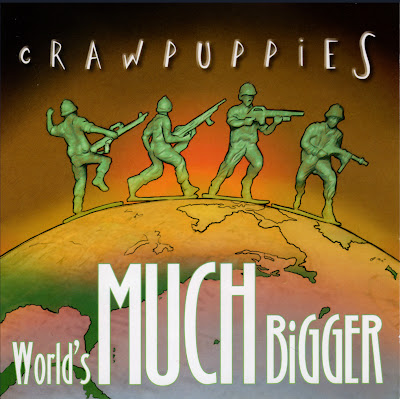 Don’t forget there’s a first rate double bill at The House Of Blues in Chicago tonight, with The Handcuffs opening for Blondie. Both bands have new brand new CDs, so it will interesting to see how much material from those discs makes it into their shows.

Here’s a review I did for the Around Hears column in the Illinois Entertainer a while back. It’s the second release I’ve heard from the Chicago band Crawpuppies, and while I liked the first, this latest CD shows a great deal of growth in terms of songwriting an performance.

Crawpuppies aim high on their second CD, World’s Much Bigger, with 14 songs that cover topical issues as well as romantic relationships. Lead vocalist-guitarist Chad Clifford has a classic voice that evokes Ian Hunter, and his well-crafted lyrics consistently hit the mark. His only misstep comes on the over-dramatic “So Mundane.” The musicianship is also top notch, whether it’s the power pop of “Owe It All To You,” the hard rock of the title track, or the acoustic and touching “My Wife.”