One Monkee Does Stop The Show 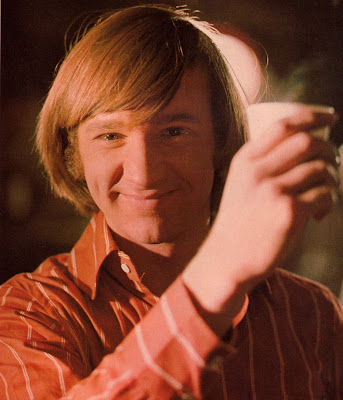 Cue the superhero music. The dimpled Peter Tork in a photo from the June, 1967 edition of WCFL Presents The Teen Set.

Today marks the first time there has been a guest post on Broken Hearted Toy. Comedic actress-journalist Desiree Burcum has graciously accepted my invitation to write about her encounter with Peter Tork at this year’s Chicago Wizard World Comic Con.

As a veteran of Famous In The Future (the same comedy group I performed with for 20 years), Burcum has written skits and song parodies about Barbie, All In The Family, Wal-Mart, hoarders, religious fanatics, the benefits of dating a dead guy, and all kinds of hot-button issues. Of the current cast, only founding member Frank Carr has logged more time with the group. Burcum’s also a freelance writer who has written indie film reviews for the Chicago Tribune. So here’s her tale of meeting Mr. Tork:

I was uninitiated. I never followed sci-fi or fantasy. Never collected comic books. My single-minded purpose for attending the Chicago Wizard World Comic Con was to meet Peter Tork. My teen crush. It was early Sunday morning and I was already lost and disoriented by the sheer size of Comic Con. I wandered past storm troopers, took a right at a Ren Faire guy and, as if the mists parted, there he was. Just like that. Peter Tork standing at…the Peter Tork booth.

Having never experienced him looking back at me, I was only able to mutter and change colors. I blame my inner 16-year old, who was giddy at the sight of Peter’s dimples. I said something profound like, “I always wanted to meet you.”

I then learned that the “Photo Op with Peter Tork” that I’d prepaid for online would take place across the convention hall. So, I stumbled off. (Did I mention I was already feeling lost? Human-Bermuda-Triangle lost.) I somehow found the place and waited in line. The wrong line. And was told, “You missed it. Peter’s gone.” -- My inner 16-year old was kicking me in the prefrontal cortex. -- “But, you might still be able to catch him at his booth.”

How I found the booth again is a mystery. But, Peter was there. I sheepishly asked his assistant if I could pay to take a picture at the booth. Because…yes, I got in the wrong line. Because…yes, I’m a bonehead.

Here’s where you can insert the superhero music. Peter overheard this and said, “That’s not right.” He offered to take me back to the photography spot. I stammered a protest since I knew he’d have to abandon his booth. But he stepped out and motioned me to follow. I must have stood there stupefied for a second, because he added, “You’re going to have to hurry.”

So, I ran with Peter Tork through the vast Comic Com convention hall. When we got to the photo spot, we ducked through the curtains. Fans were posing with Bruce Campbell of Evil Dead fame. Peter leaned in by the camera and shot them a peace sign. He waved me over. I remember a flash. It was so fast. And Peter was gone.

I meandered back, passing stacks of comic books, Batgirl, Iron Man…Eventually, I found myself across from Peter Tork’s booth again. He was greeting fans and children. I caught his eye and mouthed “Thank you.” He smiled and mouthed back, “You’re welcome.”

I had a brush with Mike Nesmith that was, shall we say, less-than-feel-good. Nice to see Peter was such a cool guy.