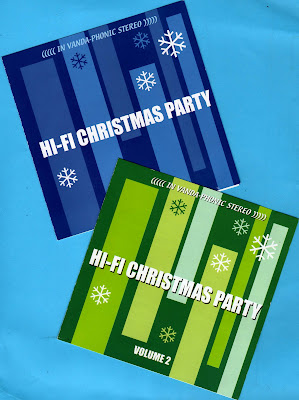 Back in my childhood, I marveled at the concept of my father making deposits to a bank account so that he’d have enough money to buy presents for us kids at Christmas time. Dan Pavelich, vocalist-rhythm guitarist for the power pop band The Bradburys has come up with a similar idea for Volume 3 of his various artists holiday compilation series, Hi-Fi Christmas. He’s seeking $750 in contributions to cover the cost of manufacturing and promoting the CD, which should drop sometime around December. Pavelich isn’t looking to bring toys to kids; he’s hoping to give normal lives to people afflicted with Von Willebrand’s disease.

His daughter Mari was born with the blood disorder, which makes it too risky for her to play many of the sports other kids can. In 2002, he put together the first Hi-Fi Christmas, which featured 19 power pop acts donating original and traditional holiday songs so that all of the profits could go to help find a cure for Von Willebrand’s disease. The artists included The Spongetones, The Bradburys, The Lolas, Ted Ansani, Jim Babjak of The Smithereens, Phil Angotti, Bill Lloyd, and Jeremy. (see Archive December 14th, 2010 for my review.) Mari Pavelich, six years old at the time, contributed a short track called, “The Chubby Little Snowman.” In terms of quality, it ranks with Black Vinyl’s Yuletunes and Chris Stamey’s Christmas Time as a highly entertaining compilation of power pop holiday music.

Four years later, Pavelich struck gold again, with another roster of artists for Hi Fi Christmas Volume 2, (see Archive December 15th, 2010 for my review). The fundraising goal remained the same. Some artists from the first release were back, along with new contributors like Joey Molland of Badfinger, The Elvis Brothers, and Marti Jones. Mari Pavelich recorded a catchy pop version of “Up On The Rooftop.”

For Volume 3, Pavelich has lined up The Jigsaw Seen, Tinsley Ellis, The Sun Kings, Jamie & Steve, and The Click Beetles. Regular participants The Bradburys, Jim Babjak, Lisa Mychols, October Elsewhere, and yes, Mari Pavelich, are also on hand. Dan Pavelich is asking for some help in advance, and has set up a website with information on how people can help by making monetary donations or by just spreading the word. There are some perks based on the amount donated, but the real reward is knowing the money will go toward helping those afflicted with Von Willebrand’s disease. Also, you’ll have the joy of helping to continue the fun and festive Hi-Fi Christmas series.