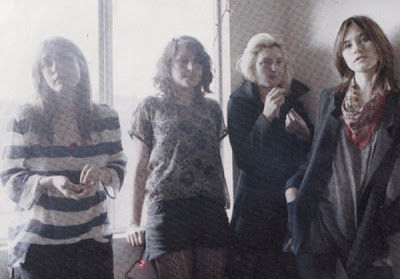 More CD releases from 2010 that struck my fancy.

Puerto Muerto - Drumming For Pistols Vocalist-percussionist Christa Meyer and vocalist-guitarist Tim Kelley played emotionally raw indie rock with a theatrical flair on what turned out be their final CD.

The Bradburys - Don’t Pump The Swingset Clever lyrics brought these tales of unrequited love to life, and having all four band members sing resulted in some sophisticated harmonies.

Vulture Whale - Bamboo You The Alabama natives decided to mimic 1980s era U.K. punk bands, working class accents and all, and came across as thoroughly authentic and fun.

You Say Party We Say Die - XXXX Brought us back to the original punk and new wave era with another CD filled with impossibly catchy guitar and keyboard driven arrangements.

Roxie Swain The Spell Of Youth Roxie Swain is the name of a band as well as its lead vocalist, who belted out Bangles style power pop tunes crafted by guitarists Tom Valenzano and Matt Walters.

Various Artists Be Yourself - A Tribute To Graham Nash Current indie artists brought together by Nash’s daughter Nile held their own identity without straying too far from the original material.

Secret Colors - Self-titled Staked out their territory somewhere in the stratosphere on this self-titled debut, with ethereal arrangements led by singer-guitarist Tommy Evans’s echoed vocals.

Welcome To Ashley - Beyond the Pale The catchy melodies on their full-length debut were infused with a raw energy fueled by some inventive guitar playing.