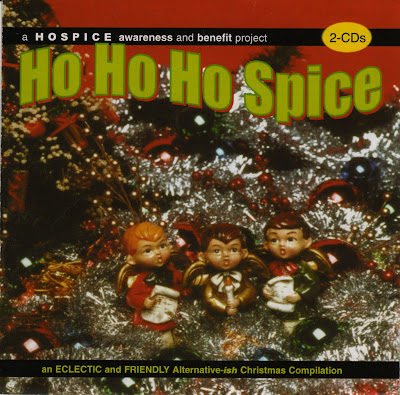 The 2004 release, Ho Ho Ho Spice offers a whopping 50 holiday songs on a two CD set billed as a hospice awareness and benefit project. Most of the tracks are original compositions, and they cover a lot of musical territory, including mainstream pop, Country & Western, ska, punk, power pop, and soul. Giving all the artists involved their due would almost be impossible, and even just focusing on the best tracks will take more that one post.

“About That Time” by The Idea, as well as “Christmas Time” and “Holiday Spirit” by The dB’s are on other CDs that I’ve already covered, so I’ll skip talking about them here.

Andrea Perry’s “Fat Aunt Bette” was on Hi-Fi Christmas, but it’s worth a closer look than I gave it previously. Her tale of an extended family preparing for Christmas uses funny, quick-rhyming lyrics like, “Fat Aunt Bette, dripping beads of sweat, bakes another pie and she’s not done yet” and “Uncle Mac, with his plumber’s crack, is bending over his Santa’s sack, putting presents in.” Her clever descriptions of cousins and grandparents also ring true, and the song has an appealing, keyboards and percussion arrangement.

Like Spike Jones in earlier days, the antagonist of The Reducers’ “Nothing For Christmas” won’t be getting any gifts, due to his bad behavior. “I pissed off everyone in my family,” the lead singer confesses while the band rampages behind him at warp speed. A life-long black sheep, he’s not welcome at the family gathering. “They didn’t even invite me, I think they do it to spite me.” Normally, I’m not a fan of negative holiday songs, but this one’s too funny to pass up.

The Alice Project’s clever solution to being too broke to buy presents is even more relevant in these trouble financial times. On “Re-gifting For The Holidays,” lead vocalist Alice Leon stares at an unwanted gift from her aunt and sings, “The idea hit me like a boot to the head./Gonna give that sweater to my cousin Ted.” The chorus, which recalls early 1960s girl group hits, proclaims “I’m packing up all that crap, adding new wrap, gonna give it someone new.”