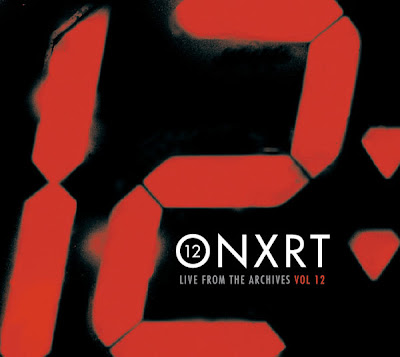 Over the years, I’ve picked up the occasional volume from an ongoing series of CDs. A Bob Stroud’s Rock ‘N’ Roll Roots here, a Rhino Just Can’t Get Enough there. Mojo has attached many fine various artist compilations to its magazines, usually based on a central theme. I also have CDs that came from issues of Q, Uncut, and Paste. When I worked in the music department at Borders back at the turn of the century, I acquired a few of its Rock Essentials discs.

But there are only two series in which I own every single volume. One is Little Steven’s The Coolest Songs In The World, and the other is ONXRT Live From The Archives. Some of the ONXRT editions have been disappointments, but as a devoted fan of Chicago’s longest running progressive rock station, WXRT, I feel compelled to have all of them. Besides, the profits go toward charities.

Fortunately, the recently released Volume 12, which benefits The Gulf Restoration Network and Rock For Kids, is one of the better ON XRT Live From The Archives compilations. As usual, the sound quality on these live recordings, all of which aired on WXRT at some point, is very good. David Byrne’s take on his former band’s “(Nothing But) Flowers” augments the original’s satirical bite with lively percussion, and The English Beat likewise does well with “Tenderness.” (Initially done by its offshoot, General Public.) The Swell Season’s Academy Award winning “Falling Slowly” retains its fragile beauty and perfect harmonies in this live setting, while Andrew Bird’s “Imitosis” mixes classical and avant garde music, with a touch of his trademarked whistling.

On the more energetic front, you can’t go wrong with Spoon’s “Don’t You Evah,” which manages to be even more fun performed live, Vampire Weekend’s “A-Punk,” and Franz Ferdinand’s hard-edged but melodic “No You Girls.” Volume 12 closes with “Home,” that southern-fried guilty pleasure from Edward Sharpe And The Magnetic Zeros.