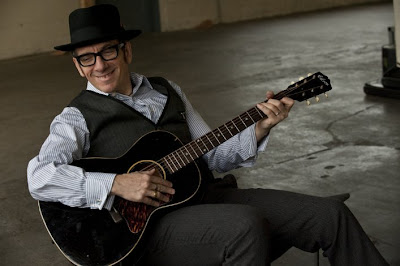 Elvis Costello dropped by radio station WXRT’s downtown studio this afternoon, just a few hours before his Big Holiday Concert at the Chicago Theatre. The show, which has been billed as a retrospective of the artist’s lengthy career, completely sold out, and 50 cents from every ticket will benefit Children’s Memorial Hospital. Roots rock singer-songwriter Alejandro Escovedo is the opening act.

Costello is touring in support of his latest release, National Ransom, and seemed in good spirits as he chatted with on-air personality Marty Lennartz about barely escaping London before a major snow storm hit. He has a long history with the station, having played WXRT-sponsored shows as far back as the late 1970s. He recalled gigs opening for Tom Petty at the Riviera Theatre, and at the long since departed B’Ginnings Club in Schaumburg.

Costello said the current show’s format is somewhat unstructured, allowing him to choose songs on a whim and follow various tangents. When Lennartz asked if Costello ever forgets any of his sophisticated lyrics, the singer joked, “We’ll find out tonight.”

Costello played a live, acoustic version of the melodic “A Slow Drag With Josephine” from National Ransom in the studio. He has reportedly described the song as how rock and roll sounded in 1921, prompting Lennartz to ask if Costello has a favorite era for music. The singer responded that every era is his favorite.

The interview also touched on songwriting, and the days when all music was released on vinyl. Costello is offering a two-record set of National Ransom in addition to the CD version, and National Ransack, a four-song 33 1/3 RPM seven inch EP of four songs that didn’t make the album, hits selected record stores tomorrow. Costello lamented that there are no record stores on Michigan Avenue, (Virgin MegaStore used to have a location there) and suggested that everyone rally around the ones that still exist.

National Ransom was produced by T Bone Burnett and Costello noted that it flows naturally from the old time flavor of their last effort together, Secret, Profane and Sugarcane, with some modern elements supplied by Steve Nieve, Pete Thomas, and other rock musicians he has worked with in the past.

After the interview, which concluded with another live song, Lennartz told listeners that back when he first bought My Aim Is True, he couldn’t have imagined that one day he'd be sitting a few feet away from Elvis Costello watching him perform.

I actually saw Elvis C. at Beginnings when My Aim is True came out. Saw him at the Aragon too. And awhile back saw him burn the house down as an opener for Dylan at the Chicago theater. One man, one guitar, the place was entranced by him. Recently read that he was once decked in a saloon by Bonnie Bramlett because he said malicious things about James Brown and Ray Charles. Yep he even picked on a blind guy. Kind of changed my whole view of the man and his work. I'm glad Bonnie decked him...