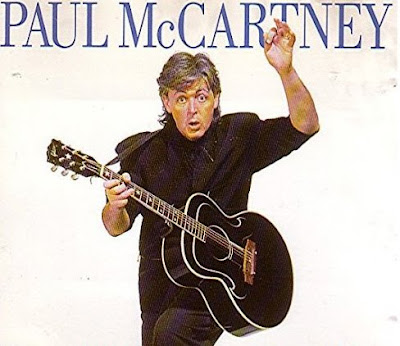 How About A Side Of Laughter With Those Scrambled Eggs? Paul McCartney has been tickling the world’s funny bone this past week. On Thursday, he appeared on Late Night With Jimmy Fallon, where he and host Fallon performed a parody of “Yesterday” called “Scrambled Eggs.” Longtime Beatles fans know “Scrambled Eggs” was the working title for “Yesterday” back when The Mac first started writing it.

(Shameless Self Promotion) This was the second time this year (that I know of) where someone used “Scrambled Eggs” for comedic purposes. The other was on my comedy series Manchester Gallery, in which I played Terrence, the curator of a fictional pop culture museum. The two-minute clips ran on the Sunday Morning Coffee With Jeff Internet Show. Manchester Gallery had the actual scrambled eggs McCartney was eating while he composed the song, on loan from The British Museum in London. Unfortunately, while Terrence wasn’t looking, the Gallery’s two cats ate them. This sparked a story line involving Terrence’s unsuccessful attempt to send fake scrambled eggs back, and an Anglo private dick who ultimately demanded that everything in Manchester Gallery be sold in order to repay The British Museum for the lost scrambled eggs.

And now back to Sir Paul, who’ll be appearing on Saturday Night Live tonight. During a previous guest shot on this show, he and the late Chris Farley created a hilarious bit in which Farley, as a wildly inept and nervous interviewer, asked McCartney if he remembered being in The Beatles, and if the 1960s ‘Paul Is Dead’ rumor was true. Unfortunately, McCartney also helped out on a typically dead grotty Adam Sandler song, so let’s hope he doesn’t get roped into doing anything regrettable tonight.

When The Rain Comes. Pretty much at the same time Paul McCartney will be cutting up on SNL, Chicago’s PBS station Channel 11 will be airing the 90-minute special, Rain: A Tribute To The Beatles. A highly successful cover band, Rain predates the play Beatlemania, and will bring its stage show back to Broadway in New York in February, 2011. PBS will also run the special Tuesday night.

“Satisfaction” Guaranteed. My review of Signal Ensemble Theatre’s Aftermath, a play with live music that focuses on The Rolling Stones in the 1960s, can now be viewed on the Illinois Entertainer’s website. I highly recommend this production, which runs through January 23rd.

Celluloid Heroes. My profile of film accompanist David Drazin is now up on the Chicago DIY Film website. Drazin, who along with Frank Carr, Lake Sirmon, and myself, was a founding member of the Famous In The Future comedy group, has since found success playing piano to silent films at The Gene Sikel Film Center and several other venues.

Razors & Handcuffs For 10 Bucks. Music fans in the Chicago area should make sure they don’t overindulge on New Year’s Eve, or they might be too hung over to enjoy a great double bill at The Abbey Pub on January 1st. Cliff Johnson and the Happy Jacks will be performing, along with The Handcuffs. Johnson, the former lead vocalist of Off Broadway, d’Thumbs, and Pezband, recently released the two-CD set, Razors And Rose Petals, which serves as a 30 year retrospective of his impressive career. Several of the tracks were previously unreleased, and there are some definite power pop gems here. Razors And Rose Petals is available for download on iTunes and CDBaby. Johnson also released Little Crimes, which featured new material, earlier this year. The Handcuffs have put out two CDs of melodic indie rock, and are just about finished with a third. Look for the band, led by vocalist-guitarist Chloe F. Orwell and drummer Brad Elvis, to offer a preview some of that new material at The Abbey. Tickets are $10 in advance, $12 at the door.

On A Sad Note. James “Jimy” Rogers, an integral figure in Chicago rock and roll who led two incarnations of The Mauds, has died of cancer at age 63. A recent tribute written by Margaret Ramirez in the Chicago Tribune covered the vocalist’s career from The Mauds’ 1960 hits like “Hold On” and “Soul Drippin’” to their reunion in the year 2000.

Still Brazen After All These Years. Any people still trying to think of what to ask for this Christmas, and have family or a loved ones who don’t mind spending a little dough, might want to ask for G.B. Trudeau’s newly released 40: A Doonesbury Retrospective. Priced at $100, the 700 page book offers 2,000 Doonesbury comic strips, as well as Trudeau’s thoughts on how the strip has evolved over four decades. Congratulations to Mr. Trudeau for giving us countless memorable characters and social satire that still packs a wallop.

Dag, He’s Busy - The Continuing Story. I’ve written about singer-guitarist Dag Juhlin in BHT before, and how he continually finds clever ways to promote his hundreds of musical endeavors. Best known for his work with The Slugs and Poi Dog Pondering, Juhlin is a member of the cover band Expo 76, which also features Pravda Records founder and member of The Service, Kenn Goodman. Expo 76 was the subject of a recent lengthy profile in the Chicago Sun-Times, in which veteran entertainment writer Dave Hoekstra praised the group’s harmonies and eclectic song selection. Unfortunately, one of Juhlin’s other bands, The Goldstars, has decided to call it quits.