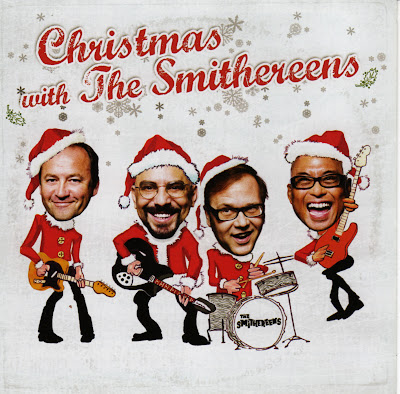 The Smithereens first dabbled in Christmas music back in 1992 by recording a silly and energetic take on “Rudolph The Red-Nosed Reindeer” for the Rockin’ Christmas compilation. The song later appeared on the 1995 Attack Of The Smithereens rarities collection, as well as on the Songs Of The Season compilation sponsored by Borders Books & Music and WXRT in 2000.

In 2007, the band, which by then featured new bassist Severo Jornacion, really showed its holiday spirit by releasing the full-length Christmas With The Smithereens. It’s a fun party from start to finish, as The Smithereens bring their engaging power pop approach to a mix of originals and cover versions. “Waking Up On Christmas Morning,” which can also be found on the Hi-Fi Christmas Party and Ho Ho Ho Spice collections, is a catchy tune penned by guitarist Jim Babjak. The fast-paced “Christmas Time All Over The World,” written by Babjak, singer Pat DiNizio, drummer Dennis Diken, and original bassist Mike Mesaros, celebrates hugging and kissing under the mistletoe, and compares the holiday to a big rock show. The other Smithereens original, “Christmas (I Remember)” takes a melodic look back and notes, “The kid inside my heart won’t die.”

The Smithereens set Clement Clark Moore’s classic poem, ‘Twas The Night Before Christmas” to a jazzy percussion-led arrangement, and open “Auld Lang Syne” with acappella vocals before launching into a rollicking instrumental jam session. All in all, Christmas With The Smithereens is a date worth keeping.